Fortunately someone called the fire department in time to save the pets inside, but the kitchen was completely destroyed and the Michigan homeowner was surprised when he heard what caused the fire. "There have been dozens of reports of microwaves turning themselves on, starting to smoke and sometimes even catching fire," says attorney Hassan Zavareei. 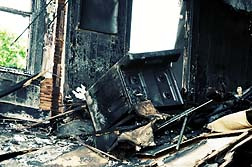 Zavareei travelled to Michigan last year to meet with the owner of the microwave. It was his GE microwave oven, manufactured by Samsung, which somehow started on fire while he was out of the house. "We have been investigating complaints about General Electric appliances for some time and from what we understand there are several types of appliances that have problems," Zavareei adds.

His firm, Tykco and Zavareei, located in Washington D.C., was approached recently by a consumers' organization that has been cataloguing complaints about GE appliances, but it was the microwave problems that really began to stand out. "We learned from them that there were many complaints from consumers about spontaneous fires in GE microwaves manufactured by Samsung."

Because there is a broad range of GE microwaves with complaints against them, Zavareei is reluctant to be pinned down to specific model numbers. The suit filed on May 19, 2009 seeks national class certification on behalf of all people who own GE brand microwave ovens manufactured by Samsung for GE since January 1, 2000.

"We are alleging that GE has known about the problem for quite a few years and they have even been investigated by the Consumer Product Safety board," the attorney adds. "We think and we are alleging there are some serious defects going on here--microwaves should not turn on and start fire, but that is what has happened in an alarming number of cases."

"We believe this has been a systemic problem that has been going on for some time," says Zavareeri. The suit names both GE and Samsung as defendants in the suit. "We have served some requests on the Consumer Product Safety Board (CPSB); however we do not have any responses as yet."

More Defective Product News
Zavareei and his partner Jonathan Tykco are both graduates of top notch law schools and started their careers working in a large criminal defense firm but crossed over to plaintiff work in 2002. "We wanted to start our own firm that worked more in the area of the public interest," Zavareei says. "And that is exactly what we have been doing—working to protect consumers, working on discrimination cases, tenants rights litigation and other areas in the public interest…We have grown into a good size litigation boutique."

The firm has successfully litigated a number of national class actions.

Hassan Zavareei earned his law degree at the University of California, Berkeley in 1995. He graduated from Duke University in 1990. Tykco and Zavareei opened their firm in 2004.
READ ABOUT Defective Product LAWSUITS

Posted by
Jennifer Meyer
on September 4, 2018
My GE (brand new) oven caught fire. It kicked on the broiler for no reason at all. It almost burnt my house down.GE wont do anything about it. I just bought it in June 2018
Posted by
Peter D Keyser
on August 16, 2017
My ge microwave caught fire last night when I tried to cook a bag of popcorn.The fire started in the center top, plastic started to melt and drip on the bag. I finally got the fire out but I don't know what damage is done above, plus I inhaled the smoke before the fan came on.Thank you for taking the time to read this.
Posted by
Khris S
on August 15, 2015
Same thing just happened to me. JVM1790SK01. Serial# GM900382K. Unit came on by itself and started smoking and smelling of insulation and made surrounding cabinets hot. We unplugged it and it stopped burning, but of course it doesn't work anymore -- not that I would use it.
Posted by
Lillian Brackin
on March 31, 2014
Our GE profile microwave turned on by itself. My husband and I were home at the time and smelled smoke coming from the kitchen. I got in touch with GE and the best they could do was send a tech out that cost us $100.00. The tech said yes it went on fire !!! To add insult to injury they charged me an additional $391.00 to send out a replacement. After spending over $800.00 originally I now own a $1300.00 microwave !!! The model # JVM1790SK01 Serial # MS904601. Thank you, Lillian Brackin
Posted by
Admin
on June 6, 2012
Hi Jean, You can refer to the GE safety recall list here (http://www.geappliances.com/products/recall/) to find out what GE products have been recalled.
Posted by
Jean C.Lipman-Blumen
on June 5, 2012
How do I find out if my GE Profile Sensor Microwave Oven, Model # JE1360BC 001 is safe to use?
Has it been recalled?
Thank you.

Posted by
Sherri Davis
on May 21, 2012
Can I join in on this class action lawsuit. My microwave started on fire and was investigated by insurance company and was found to have the defect and Samsung knew about the problem and didn't initiate a recall. I had extensive damage and had losses.