Steve Farrell can't play catch with his grandson anymore; he can't even pick him up since having two shoulder surgeries. Farrell had a shoulder pain pump installed on both occasions and now wonders if they were defective.

Farrell is also on social security disability because can't go back to his line of work--dry wall taperer and construction worker. "I ran an auto taping tool called a bazooka for about 20 years and over that time both rotator cuffs in my shoulders deteriorated to the point that I needed an operation," says Farrell. " I had the first surgery on my right shoulder in November 2006 and the second operation on the left shoulder in February 2007. 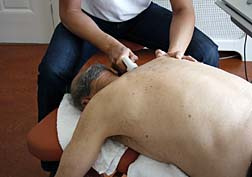 "The pain pump was installed both times and both my shoulders returned to pre-op conditions. When I woke up from surgery the pump was in place and a few days later when I went to rehab it was removed. The surgery didn't do any good; in fact it made it worse. I still have limited range of motion and every time I move my shoulders, I can feel them grinding and it gets to the point where I can hear a click or popping sound then it basically quits. There is a constant pain."

Farrell's orthopedic surgeon is aware of his symptoms. "He told me to be patient and allow some more time," says Farrell. However, one year seems like a very long recovery time.

"I will never be able to tape drywall again," says Farrell. Naturally, he is concerned about finding another line of work. The symptoms he is experiencing sound very similar to [PAGCL]:

"I'm not sure if these symptoms are directly related to the shoulder pain pump or if my rotator cuffs were so damaged that is the best surgery could have done," says Farrell.
"In one aspect it is better: I don't wake up in the middle of the night in pain like I used to. But I think I am addicted to Vicodin—a pain killer—because I've been taking it since surgery. I was also on other pain meds that didn't do any good. One thing I know for sure--my quality of life has also deteriorated.

If you or a loved one has suffered damages regarding defective shoulder pumps, please contact a lawyer involved in a possible [shoulder pain pump lawsuit] who will review your claim at no cost or obligation.
Request Legal Help Now