"After my shoulder pain pump was removed, I went to see the doctor and everything seemed to be going okay," Debra says. "I was experiencing discomfort and some problems with movement in my arm but I assumed some of that just went with rotator cuff surgery anyway. There was no therapy after my surgery. 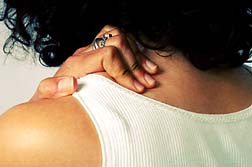 "Still do this date [over a year after the surgery] I have problems with my arm. When I move in certain ways, it causes pain. When I lie down in a certain way, my arm and hand fall asleep.

"My surgery was in 2007—at the end of 2007, I believe. To be honest, I don't remember exactly when I thought something wasn't right. I had other injuries that took time to heal, so I assumed the pain was normal and that my arm wouldn't ever be perfect again. It was my right arm and I am right handed.

"I would say this has somewhat affected my life. I don't have the strength I used to have. Movement in my arm is different. I don't want to do certain things because it hurts—certain lifting and raising my hand over my head. It depends on how fast I lift my arm up and put it down. That definitely has changed. My arm does get tired more quickly, too. There is some pain when I am brushing my teeth and my hair. My arm seems to be heavy.

"I didn't have these problems before the surgery. I haven't gone to a doctor yet because I assumed the problems were because of the surgery and they would be permanent. I thought, 'Why waste money going to the doctor?'"

Debra says it was only when she began doing Internet research that she learned about problems with the shoulder pain pump. Prior to that, she had no idea the pump could have caused her shoulder pain.

"The constant, nagging pain is there. I get sharper pain when I do different things [such as lifting her arm over her head].

"I would tell people to check online or with other doctors to find out if there is anything to know about the stuff they do before, during and after surgery. I didn't. But, I didn't know they would install the pain pump. When I woke up, it was there and my husband had been told what we had to do with the pump."

More SHOULDER PAIN PUMP News
Some patients are still learning that their nagging shoulder pain could have been caused by the use of the shoulder pain pump rather than by the surgery itself. Like Debra, they have suffered through pain and deterioration in the shoulder, but thought that was a normal process associated with shoulder surgery. More and more are realizing that the pain could have been caused by a device that was intended to prevent pain in the first place.