Doctor Urges Colleagues Not to use Shoulder Pain Pumps

The doctor who co-authored a study that showed [shoulder pain pumps] can cause life-long pain and injury is asking fellow doctors not to use the pain pumps in arthroscopic surgery.

Dr. Charles Beck warned that shoulder pain pumps have the potential to cause permanent damage to the shoulder and noted that hundreds of people are at risk for developing the condition. He also reported that results of his study were sent to the manufacturers of the pain pumps two years ago, but they have not adequately responded to the study. 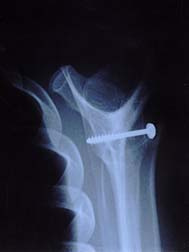 The warning was timed to coincide with the fourth quarter of the year, a time when the number of orthopedic surgeries rises, partially because of sporting activities such as football and skiing.

The study was published in the October 2007 issue of The American Journal of Sports Medicine (AJSM), and links the use of high-volume shoulder pain pumps to Postarthroscopic Glenohumeral Chondrolysis (PAGCL), a condition in which hyaline cartilage in the shoulder joint is worn down. As much as 63 percent of patients who use shoulder pain pumps are at risk of developing PAGCL, which sometimes requires shoulder replacement surgery to treat.

According to the study, "Intra-articular pain pump catheters eluting bupivacaine with epinephrine appear highly associated with postarthroscopic glenohumeral chondrolysis." The study's authors further note that the shoulder pain pumps, especially those that use bupivacaine with epinephrine, should not be used until their effects are further studied.

PAGCL is not limited to elderly people or those who have compromised health. In fact, people who are young, active and otherwise healthy are at risk for developing the complication. People as young as 18 have reportedly developed PAGCL. The condition makes moving the arm and shoulder joint very difficult and can result in an inability to perform even seemingly simple tasks. Some athletes have been forced to quit their sport because of PAGCL.

More News
In response to study results linking shoulder pain pumps to PAGCL, I-Flow issued this warning about its ON-Q DFU (a shoulder pain pump): "Avoid placing the catheter in joint spaces. Although there is no definitive established causal relationship, some literature has shown a possible association between continuous intra-articular infusions (particularly with bupivacaine) and the subsequent development of chondrolysis."

Lawsuits have been filed against companies that make, market or distribute pain pumps, including Stryker, I-Flow Inc., BREG Inc., and other companies. The lawsuits allege that the defendants did not warn the medical community that the safety of the pumps had not been fully established. Furthermore, they argue that the defendants did not warn that continuous supply of pain relief medication could cause permanent injury.

If you or a loved one has suffered damages regarding defective shoulder pumps, please contact a lawyer involved in a possible [shoulder pain pump lawsuit] who will review your claim at no cost or obligation.
Request Legal Help Now