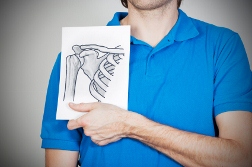 John’s first surgeon told him that he would wake up with a shoulder pain pump because it would ‘help him out’ but first he would see if insurance would pay for it—which it did.

John knew he was in trouble just four months after having rotator cuff surgery. “I was driving home and heard a distinct pop in my shoulder and it got worse from there,” he says. John suffered through the pain because he didn’t have insurance to cover another doctor’s visit.

“For the longest time I wasn’t sure what was going on with my shoulder, until I saw a commercial on TV about the shoulder pain pump and the damage it can cause,” John explains. “I called the surgeon’s office to ask if my cartilage could be damaged. But they wouldn’t see me because I still owed $986 for the surgery. So I went to the hospital and had x-rays.”

John’s fears were confirmed with the x-ray results: he had Postarthroscopic glenohumeral chondrolysis or PAGCL. He called the surgeon again with the diagnosis—this time they would see him if he paid $500, which he did.

“My surgeon said there were no signs of damaged cartilage so I got a second opinion. The second surgeon I saw confirmed that I had PAGCL—I hardly had any cartilage left in my right shoulder.”

In 2010, John had a reverse shoulder replacement. He went back to therapy for another three months and continued with home therapy, hoping that his shoulder would improve and he could get back to his electrical business in the construction industry.

“My second surgeon said that I will never work at construction again,” says John, adding that his business ‘folded’. Now he rents cars. “I’ve taken too many days off work because of so much pain in my shoulder—the second surgery didn’t put me back together again.

“I have days when I can tolerate the pain but these last four days were rough. I am on methadone—I’ve been taking it four years; it would hurt too much if I didn’t take it. I wanted to miss work today but I am so worried about getting laid off. And I am often embarrassed working with customers because if I bend down to get some paperwork, when I get back up the sharp pain in my arm makes me grunt. Sometimes I explain to customers about my shoulder surgery and some customers even ask if I have had surgery on my shoulder because they can see the difference in my shoulders-- even through my clothes.”

After John was told that he had PAGCL, he obtained his medical records from the hospital. He was given a Stryker pain pump. “It says that once this surgery was completed the joint was flushed and a pain catheter was placed under direct visualization,” says John.

“A specialist read my MRI and told me that I have ‘extensive loss of cartilage and superior joint space.’ Now I have a bone scan scheduled but from what I understand, not much can be done. This pain pump has really messed me up; I usually sleep about two or three hours a night then wake up. Sometimes I have to take more methadone but I try not to.

More PAIN PUMP News
"I’m 40 years old and can’t even play with my kids. I can only pick up my youngest in my left arm. Of course this has also been very depressing—for me and my family. I could have given my family everything they deserve, including college educations, before surgery. Now I make $8.75 an hour plus about $300 per month in commissions. I got divorced because I couldn’t provide like I used to. I didn’t ask for this—it is so frustrating.

"As for Stryker, how can they blame it on the surgery? I need to get an experienced attorney to file a shoulder pain pump lawsuit. Apparently this medical device company said it could have been a failure from the first surgery but my second surgeon said there is no way that could have happened. It takes years for cartilage to destroy naturally.”

July 30: While John has begun to seek legal counsel, the results of a nuclear bone scan last week determined that he needs another surgery at the end of August, which means more time off work.