Patty had shoulder surgery to repair a rotator cuff tear in 2009 and she has been on pain medication ever since. Both Patty and her doctor believe that cartilage damage and infection post-surgery is due to the shoulder pain pump that she had in her shoulder for four days. According to her doctor, that is three days too long. 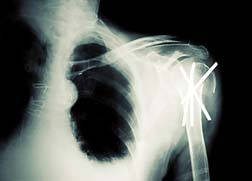 "I went into a tailspin right after the pain pump was removed," says Patty. "The pain was so bad that I wound up back in hospital and on morphine for three days. The next few months during my recuperation were sheer misery; every time I moved my shoulder I heard popping, grinding and cracking, and I had no idea the shoulder pain pump was to blame."

Next up, Patty underwent a second shoulder surgery, this time to clean out a staph infection she picked up in the hospital. She was back in physical therapy trying to use her arm again, but she had turned into a "lefty" because she couldn't move her right arm up further than her waist

To make a long story short, Patty had two more surgeries to clean out the infection, then she found out her worst fear—cartilage damage.

"No one told me that the shoulder pain pump could cause cartilage damage until I started investigating and insisted on seeing my MRIs," Patty explains. She finally connected the dots in January of this year.

"My GP sent me to a different physical therapist—at this point my insurance had run out so I had to pay," Patty says. "After working with her for six months she said that something wasn't right, especially with all the cracking and popping going on every time I moved my arm. She looked at my MRIs, got the written reports from my surgeon and told me, 'In all my years as a therapist there is nothing I can do for you,' adding that a staph infection doesn't usually do this kind of damage.

"One report attached to the MRI I had in October 2010 says 'loss of cartilage' and the other says 'complete loss of cartilage on both sides of the joint.' Not one doctor mentioned this to me—I was furious.

"Apparently there is only one doctor in all of Idaho who does full shoulder replacements and my GP referred me to him. January 31, 2012 was the first time I heard anyone blame my damaged shoulder on the pain pump.

"'By any chance did you have the shoulder pain pump?' he asked me after reading the MRI reports. Yep, I did. Then he asked if it was left it my shoulder for more than a day. Yep, four days. 'I haven't used the pain pump for 12 years because they cause infection and cartilage damage, and as far as I am concerned, that is the cause of your problems,' he said.

"Of course I can't go back in time, but I would have been so much better off just living with the injury. Now I can't go off pain medication and that has a whole set of problems: the meds are wreaking havoc with my digestive system and I have ongoing bowel problems, and now I am on antidepressants, which I have never taken in my life. I'm only 56 years old but feel a lot older, all because of this shoulder pain pump.

"All the therapy I had, the time and money, was a complete waste of time. At the very least, I should get compensated for that. I'm not the suing kind of person but this is my body I'm dealing with."

If you or a loved one have suffered losses in this case, please click the link below and your complaint will be sent to a defective products lawyer who may evaluate your Pain Pump claim at no cost or obligation.
Request Legal Help Now