Maytag's All Washed Up

Maytag already settled one class action lawsuit with its front-loading washers a few years back, but its problems are far from over - it just got slapped with another recall, leaving many consumers even more frustrated - both with their washers and how Maytag handled the first recall. 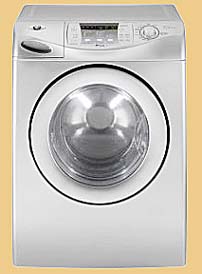 "I bought my front-loading Maytag washer several years ago and joined a class action lawsuit that was technically settled," says Janis Grant, "but my $400 settlement had to be applied to a new $1,200 machine - I figure that Maytag actually profited from the recall."

In April 2005, Maytag settled a class action lawsuit alleging odor, mold and mildew problems with its Neptune washers. More than two million consumers who purchased a Maytag Neptune Front-Load Washing Machine (any model, including stackables) any time between April 1, 1997 to August 9, 2004 were included in the class and were entitled to replacement costs up to $500, and/or washing machine purchase certificates up to $1000.

In September 2005, Maytag recalled 5,000 Neptune top-loading washing machines - it had received reports that the spinner could malfunction and break apart, posing a safety risk to consumers.

Grant received a certificate for a replacement machine but it was only available by special order, a very overpriced top-loading machine. "My settlement was for $400 to be applied to this $1,200 machine, so the net outlay for us would have been $800," says Grant. "As anyone can see, the restrictions placed upon certificate redemption only worked in Maytag's favor, not the consumer's. This was an outrageous sum. In the long run, Maytag profited from the settlement and the recall!

When I got involved, I was appalled that Maytag could profit from a settlement. I think I just tossed this certificate out. I ended up buying a second-hand washer and it was definitely not a Maytag: I've had it for more than five years and it is working well. Meanwhile, the Maytag is sitting in my basement collecting dust. My impression from researching about Maytag online is that they knew they had a defective product. I'm not knowledgeable about these matters but I could smell a skunk!"

If you purchased a Maytag or Samsung front loading washing machine, please contact a [Maytag Washer] lawyer who will evaluate your claim at no charge.
Request Legal Help Now

Any solutions out there? Must I hire a lawyer? I bought this machine brand new, and I've used only HE soaps as recommended...

Posted by
Joan Finnell
on December 19, 2015
Are there any current class action law suite still going on with Maytag washers. I also have a moldy machine. I do appraisal and have gone to several homes over the past couple of years and everyone I have talked to have the same problem. I never was notified about any class action law suites in past about these washers. Is there anything we can do at this point to get our money back for at least the wash machine. I have also thrown away towels, bed sheets and clothing because of the smell. I think Maytag owes us much more than just a wash machine.
Posted by
mark hill
on December 7, 2015
I purchased a Maytag Bravos washing machine around 5yrs ago. I did not purchase an additional warranty thinking Maytag machines last a long time. I was totally wrong. Just recently our expensive top load Maytag is making loud noises when running. I had a service rep come out and he said it would cost around $600.00 to replace a bad bearing. I only paid the service call which was over $100.00. I will never purchase another Maytag again.
Posted by
Tony Spelchuk
on October 26, 2015
Purchased a type 832a just 3 years ago. First problem was the smell, clue 1. Tried every this for this tossed out shirts, towels, etc. Clue two major flood in basement.

Posted by
Tom Jarvis
on October 24, 2015
I think it's time someone pointed out that Maytag is no longer Maytag but is now Whirlpool. Fred Maytag must be turning in his grave.
Posted by
Fran
on June 1, 2015
I have a Maytag Neptune. Since I have had it my clothes are always musty. Not all the clothes mostly my hubby's shirts and towels. I do everything I am suppose to do. I use HE soap clean it out all the time leave the door opened. Yesterday I tried the bleach again. When I noticed the bleach was in the tub waiting a few minutes and stopped the machine opened the door and the whole inside was full of soap. So when it finished I tried it again and the same thing soap. So I called Maytag today and now I am suppose to put finger in the drum and wash it on hot water then wash it twice on hot water. I spend more time washing this machine out. I will try this one more time.
Posted by
Jessica Keeney
on March 10, 2015
We purchased the Maytag top loading Bravo HE in 2008. Big mistake. We have replaced the computer board, pump twice, and now the bearings. I give up, I will never EVER buy any Maytag appliance anywhere E. V, E. R. Whirlpool, Sanyo, and other brands manfacturered by Whirlpool (Maytag)....buyer beware. Please look at what others say about these lines of washers.
Posted by
Debbie Lord
on December 30, 2014
Maytag Appliances- biggest rip off ever! Home Depot needs to stop carrying Maytag appliances.
December 30, 2014
I purchased a Maytag washer Type 832-A, Model number MHWE200XW00, Serial number HL11990545 in May, 2011 from Home Depot. After just three years it flooded my laundry room. Home Depot couldn’t help me, and Maytag Customer Service tried to really rip me off.
I called Home Depot, asked why they continued to carry a product they knew had terrible complaints and all they could tell me was they are sorry I am unhappy with my washer, then gave me Maytag’s customer service number.
I called Maytag- first the guy tried to sell me a $400 extended warranty package- total rip off, Maytag should be ashamed, then said he couldn’t help because it was past the time period. There is no telling how many people they are ripping off with that little deal. Consumer Affairs should be all over this. So then he offered to get a Maytag repairman to come to my house, but couldn’t tell me how much the diagnostic visit would cost or anything else. He was worthless.
I hired a local repair person to come to my home, the part is $140, its the tub seal, weak and flimsy- has a giant hole. I only wash clothes and towels, nothing else. My local guy is cutting me a deal on the labor, still going to be $200.
Maytag isn’t what they used to be and I will never, ever purchase another product from them again, ever. And I would suggest you don’t either. Maytag appliances only last a couple years at the most, and its customer service is horrid.

Posted by
Barbara Spangler
on December 17, 2014
I bought a maytag 3000 series in 2011. I have had to call a technician out twice. the power button no longer works now. In order to purchase the part will be $250. wont buy a maytag anymore
Posted by
Edith
on December 5, 2014
I bought a maytag bavos xl, two years ago after reading about it on the maytag website and talking to the salesman at the appliance store.
I have not been happy with it since the first time I used it you cant do large loads in it, and it doesnt get the clothes as clean as a regular top load washer.


Two months ago I started a load in my washer and a few minits later I go in my hallway and there is water everywhere, even went though the wall into my kitchen floor.

At first I thought the hose behind the washer broke, but when I checked the washer after pulling all the clothes out the agitater wouldn't move its froze up.
My husband recently passed away too,

So now I have a useless washer I can't afford to fix and I have to wash my clothes at the laundromat..
I had always thought maytag to be a trusted brand, not anymore.
After reading on more consumer websites this is a big problem with these washers.
I won't buy maytag again.