It has been almost two years since C.R. Bard and subsidiary Davol, in concert with the US Food and Drug Administration (FDA), recalled various models of the Composix Kugel Mesh Patch. And while the plastic 'memory' recoil ring--the primary culprit in patient incident reports--has been strengthened, that doesn't help the thousands of patients still carrying one of the defective memory rings in their body.

The plastic rings have been known to break and separate in the body, causing lesions in tissue and vital organs.

The Kugel mesh patch system is used for the repair of ventral hernias, which are protrusions through the abdomen when scar tissue from a previous surgery weakens. The Kugel mesh was developed in an effort to speed the procedure, and cut down on recovery time. With, on average 700,000 hernia repair procedures required each year, it's little wonder that the medical community was looking for a more efficient way in which to deliver service to patients, and mitigate the strain on hospitals and the health care system. 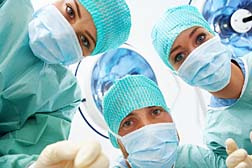 Enter Dr. Robert D. Kugel, who devised a procedure using non-invasive, laparoscopic surgery. Rather than one large incision, a series of small incisions are made, allowing surgeons to insert small ports and instruments, as well as a camera. The mesh patch is inserted in a rolled-up state, and then deployed in the body by a plastic 'memory ring' which also serves to help hold the patch in place.

As with the mesh patch, the memory ring stays within the body, and the risk--especially with patients carrying the rings identified in the recall--is that the ring could break from stresses stemming from the surgery, or post-operatively from everyday stresses in the human body.

The FDA initially announced the Composix Kugel Mesh patch recall on December 22nd, 2005 and in January 2006. The recall was later expanded in March of the following year. A further update was issued in January of this year.

For its part Davol and C.R. Bard appear to have carried out due diligence through the informing of its customers and health care professionals throughout the process, once problems with the Kugel Mesh were identified.

However, numerous lawsuits claiming negligence on the part of the company to properly disclose incident information have been filed. It is also alleged that the manufacturers knew about the defective ring prior to the recall.

There are little, if any resources for patients with Kugel Mesh problems on either the Davol or Bard web sites. While there is no shortage of information and reference material concerning hernias and the Kugel mesh repair system, there is little reference to the recall on either site, save for a press release dated January 13th 2006 and posted on the Bard site.

In it, the company states that it was recalling the Kugel Mesh X-Large patch due to the possibility that the plastic coil ring "...may not withstand the increased stress associated with certain surgical placement techniques." As at the time of writing, the company had received 24 incident reports of broken rings out of 32,000 patients, an incident rate of 0.08 percent.

However, since that time the reports have grown, with over a hundred incident reports filed with the FDA, according to sources. A number of lawsuits have been filed-- so many, in fact, that all federal cases have been consolidated and transferred to the district of Rhode Island for pre-trial proceedings.

There appears to be no reference of this on either the Davol, or Bard web sites. Many medical device and medical product manufacturers take the high road and use their web sites as resources for patients dealing with recalled product. However, that appears not to be the case here, with the only entry remaining the aforementioned press release from 2006. In it, the company spends more time analyzing the business impact of the recall than it does dealing with the specific risks, and results of a failed recoil ring.

A web link to Davol listed in an FDA summary of the recalls, does not work.

The manufacturer wasted no time revising the failed recoil ring, once the defect came to light. In a document filed with the FDA and date-stamped June 2nd, 2006, Davol had already bench-tested a re-designed recoil ring that featured increased weld strength for the ring assigned to the Composix XL size mesh.

With hernia repair such a booming business, and surgeons continuing to prefer non-invasive techniques, it would be in a manufacturer's best interest to mitigate any market hiccups for its product resulting from a recall.

Considering the lack of recall information on either the Bard or Davol web sites, it would be easy to assume there wasn't a recall, at all.