Frances knew that many people are suffering with defective Stryker knee replacements but she thought “It would never happen to me.” The past few years have been a challenge, to say the least. She is still reeling from the ramifications of her knee implant failure, including two revision surgeries. 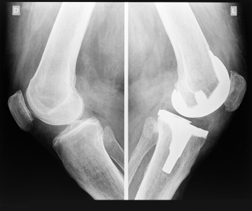 Frances is still on active duty in the army but has been on convalescent leave for much longer than she anticipated. And she may never return to work. “I had knee surgery at the county hospital, which wasn’t my choice, but in the army you do what you are told,” she says.

Five days after surgery Frances went home in a lot of pain. Home Health Care visited daily but that was almost a waste of time and money. “I told the nurses that something was very wrong,” Frances says. “I was losing weight and vomiting. My knee seemed to be swelling but my physical therapist told me to keep bending my knee because the swelling is normal.”

It wasn’t normal. To make matters worse Frances was relying on Home Health Care to relay her symptoms to her doctor, but she found out on the six-week follow-up that never happened.

“I fired a lot of questions at my surgeon,” says Frances. “Do I have an infection, a blood clot? When I told him that I was losing weight, he told me to drink Ensure. He said I had to get my knee manipulated because I wasn’t bending it enough. He also said that I was being non-compliant, but I was doing everything the military told me to do. I am used to taking orders.”

Frances returned to the hospital. She had a general anesthetic for the manipulation and was told she would stay overnight. She also had a culture taken from her knee that showed she had Mercer: a serious staphylococcus infection.

“One week later they removed my Stryker knee and put in a cement spacer,” says Frances. “My surgeon said, ‘I guess I have to eat crow now.’ Yep, he got that right. I stayed in hospital on antibiotics for another week and Home Health Care came by again when I got home. I was supposed to see an infectious disease doctor but had to wait until I could get well - at that point I couldn’t even get up.”

Frances lost over 45 pounds. “I got down to 113 pounds, but gained it back,” she says with a laugh. “I have no other choice than laugh because if I didn’t I would get too depressed.

“Six months later I saw the infectious disease doctor but he didn’t do much besides take military money. I had my first knee revision in October 2012. And I had another Stryker. I tried my best to return to work but my knee still wouldn’t bend; I couldn’t believe that revision surgery made it worse!”

Frances requested yet another revision surgery and the military granted her request - she had a second knee revision last November. But she still has problems with mobility.

She asked the surgeon if the Stryker knee could be defective because she had been hearing about all the Stryker recalls and so many hip and knee replacement failures.

More DEFECTIVE KNEE IMPLANT News
“Now I am fighting an uphill battle. I am still not getting 90 percent range of motion as promised by my surgeon,” Frances adds. “I asked for a metal test and that proved negative so I don’t know where the problem lies. I had a checkup just a few weeks ago and I need yet another manipulation.

“I have been in great shape all my life - I don’t smoke or drink. I’ve had 20 years of military service, but my military career is over with. Now my good knee is messed up, due to taking the brunt of it all. I don’t want people to feel sorry for me and I don’t want people doing things for me. I am used to being pro-active and now I have a walker. I don’t know what is going to happen but I do need to tell my story. I just wish someone would fix me…

If you or a loved one have suffered losses in this case, please click the link below and your complaint will be sent to a defective products lawyer who may evaluate your Defective Knee Implant claim at no cost or obligation.
Request Legal Help Now