The calendar ticking over to a new month coincided with the release of a decision by the New Jersey Supreme Court approving the consolidation of all pending and future state-based hip replacement implant failure lawsuits against Howmedica Osteonics Corp. within multicounty legislation. Howmedica is a subsidiary of Stryker Corp., and the products involved are described as LFIT Anatomic Cobalt Chromium V40 femoral heads. 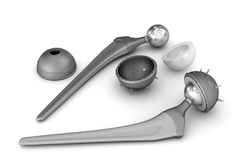 Defective hip implant lawsuits against a host of manufacturers – Stryker among them – parallel the introduction in recent years of new-age hip implant components fashioned from metal alloys, in a departure from more traditional materials such as ceramic. Metal-on-metal implants were thought, in theory to extend the life of traditional hip implants and thereby expanding the market to a burgeoning population base more active and seeking more robust implants than that of a previous generation.

However, metal-on-metal implants and other new-age designs, allowed to enter the market with minimal testing through the FDA’s 510(k) Clearance protocol, have proven to be problematic.

Stryker, like other manufacturers have had its share of difficulty, and this past August triggered a voluntary recall of certain lots of its femoral heads. The components in question were manufactured prior to March, 2011 and were recalled due to “higher than expected” complaints about the failure of the femoral head to fully lock onto the stem at the stem-head taper junction, also referred to as “taper lock failure.”

Federal defective hip implant lawsuits were consolidated in federal court in Massachusetts this past April by the US Judicial Panel on Multidistrict Litigation.

It is interesting to note that the Supreme Court, in its ruling went beyond the specific components that had been recalled by Stryker, and opened the multicounty litigation to femoral heads that were not subject to last summer’s recall. A hip replacement lawyer advocating for Stryker plaintiffs noted that in the view of plaintiffs, the problem with the femoral heads is not limited to their design, but rather encompasses their association with the titanium alloy femoral stems related to the Stryker Accolade, Meridian and Citation products.

More DEFECTIVE HIP IMPLANT News
At the heart of the alleged hip replacement implant failure is corrosion at the point where the head and neck intersect – corrosion sufficient in scope to cause the femoral head to break free from the neck of the stem. Such a failure would require immediate revision surgery. The fretting of minute metallic particles from the metal alloys have also been suspected to cause inflammation and infection of surrounding tissues, and the potential for the alloys to be absorbed by the bloodstream, causing toxic metallosis. The latter is a serious condition that requires revision surgery, even for a hip implant that is performing reasonably well.

The case is In re: Stryker LFIT Anatomic CoCr V40 Femoral Heads Litigation, Case No. 624, in the Superior Court of the State of New Jersey, County of Bergen.