Dozens of Stryker hip implant lawsuits will be consolidated to a Massachusetts federal court over several weeks so that the cases can be handled by one judge. 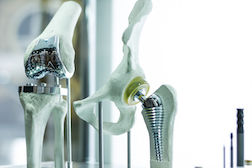 The federal court system uses multidistrict litigation (MDL) as a tool to consolidate multiple similar cases focused on a particular argument to one judge for pre-trial discovery.

Most of the pending Stryker implant lawsuits focus on corrosion of the LFIT V40, which can lead to serious health consequences and necessitate surgery to remove and replace the hip implant, according to the transfer order.

The defendant in the cases, argued against the consolidation on the grounds that there are "only a few actions" regarding the device. However, the JPML disagreed, noting that around 33 Stryker hip replacement cases in 17 different districts are pending, according to the order.

More DEFECTIVE HIP IMPLANT News
In the current MDL, Stryker had requested that the Boston MDL be renamed from "In re: Stryker Orthopaedics LFIT V40 Femoral Head Products Liability Litigation" to "In re: HOC LFIT V40 Taper Lock Litigation" and also wanted to restrict the MDL lawsuits to recalled hip implant devices with taper lock failure. However, the JPML disagreed.

"We decline to change “Stryker” to “HOC” because defendant marketed the device to physicians under the Stryker brand name. We also decline to change the title to add “taper lock” to the litigation caption or to limit the scope of the MDL only to recalled devices," according to the transfer order.

Few plaintiffs in the pending lawsuits specifically cited "taper lock" as an issue, the panel wrote in its order. Instead, they allegedly experienced problems with corrosion and metal debris, according to the JPML, which will allow non-recalled hip implant devices to be included in the MDL.

Posted by
Pepe roskin
on April 24, 2017
My wife has the implant, can we do something?