Catheters are devices of varying sizes designed for insertion into the body in order to facilitate a wide variety of treatments. They are designed to unobtrusively perform their respective functions and tasks, followed by extraction without any lingering sign the catheters had been there in the first place. However, various reports of defective catheters causing injury, together with a rash of recalls, suggest catheters are not living up to their role as an invisible sentry. 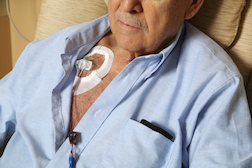 Already noted previously has been the recall of the Fetch 2 Aspiration Catheter, manufactured by Boston Scientific Corp. A Class 1 recall was issued for the device in association with the US Food and Drug Administration (FDA) in the spring due to reports of breakage at various points along the catheter shaft during removal of small blood clots from peripheral veins and coronary arteries in an effort to restore blood flow to the heart. Pieces which break off can block the blood supply, or migrate and result in further injury, or death.

Cook Medical has also issued prior recalls of its Shuttle Select Slip-Catheter, and Beacon catheters.

But there are others.

On October 21, Centurion issued an urgent recall of its Centurion Convenience Kits containing Multi-Med Single Lumen Catheters distributed between May 23, and October 18 of this year. About 1,000 kits are affected.

The catheters are inserted into a blood vessel for the sampling of blood – a standard medical procedure. The problem, according to the defective catheters causing injury recall, is the observance of excess material that remains at the tip of the catheter during the manufacturing process. The concern is for the excess material, if present, to break away from the catheter while in the blood vessel and cause serious health implications including, but not limited to the development of blood clots, embolism or the migration of excess material to vital organs. Death is a possibility.

There’s more. Vascular Solutions has recalled its Twin-Pass Dual Access Catheters for the very same reason – excess material at the tip of the catheter left over from the manufacturing process.

A total of 15,896 devices were manufactured and distributed globally between October, 2014 through September of this year, with about a third distributed in the US. The recall involves 5,784 units in the US that were distributed and, at the moment, are not yet beyond their expiry.

The concern here is over the potential separation and detachment of the polytetrafluoroethylene (PTFE) coating on parts of these devices, releasing particulate into the bloodstream. Depending on the size and quantity of the particulate, the latter could lead to a thromboembolic event.

There do not appear to be any active lawsuits associated with these recalls, although the latter two recalls are more recent than the Cook Medical device recalls, and those of Boston Scientific.

More DEFECTIVE PRODUCTS News
The Dallas Morning News (10/01/16) reports on a heartbreaking story of a Texas woman who died at the age of 60 years. A catheter lawsuit against the hospital involved alleged medical malpractice surrounding the presence of an 8-inch fragment of a plastic tube from a catheter left inside Debra Wilson’s aorta during surgery in 2007. Hospital records show the large tube fragment was visible on X-rays conducted as early as November, 2007 but the Wilsons allege they were never told until Debra suffered a debilitating heart attack in August of this year.

The Dallas Morning News report indicated surgery to remove the fragment was deemed too risky.

The catheter lawsuit was eventually dismissed, however Charlie Wilson – the husband of the deceased – has indicated he will either appeal, or refile his catheter lawsuit founded upon different claims now that his wife is dead.

The Wilson case highlights the potential health risks posed by catheter fragments, regardless of how large or small, when left inside the human body.

If you or a loved one have suffered losses in this case, please click the link below and your complaint will be sent to a defective products lawyer who may evaluate your Defective Products claim at no cost or obligation.
Request Legal Help Now