The data breach that affected retail giant Home Depot, and revealed in recent days, is not only the latest example of a hacker accessing customers personal information amidst data storage systems that are generally assumed as secure, it could be the largest yet. 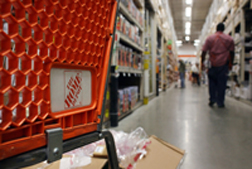 The breach could eclipse that of Target, which affected about 40 million consumers. This latest breach, according to various reports, could be far worse - as many as 60 million consumers in both the US and Canada. It has been reported that Home Depot locations in Mexico were not affected, and consumers accessing Home Depot’s online system at HomeDepot.com are also thought to be safe. Personal ID numbers for debit cards were also not taken.

However, consumers personally shopping in any of home Depot’s 1,977 locations in the US and 180 stores in Canada have a lot to worry about, and industry analysts say this could be very serious on various fronts. An industry watcher with an Internet security consulting enterprise noted in comments published in the New York Times that it doesn’t help that the breach was not announced by Home Depot itself, but was instead revealed by a blogger who caught wind of it.

“Honestly, Home Depot is in trouble here,” said Eric W. Cowperthwaite, vice president of Core Security, an Internet-security consulting company, in comments published in the New York Times (9/8/14). Cowperthwaite noted that it was a security blogger, Brian Krebs, who broke the data breach ahead of Home Depot.

“This is not how you handle a significant security breach, nor will it provide any sort of confidence that Home Depot can solve the problem going forward,” Cowperthwaite said.

Fodder for data breach lawsuits will also likely include the outcomes of studies that have concluded retailers in particular are not adequately prepared for hack attacks. The New York Times noted a study conducted by The Ponemon Institute and DB Networks - respectively an independent security research firm and a database security firm. The study found that most computer security experts in the US believed there was a distinct lack of tools and technology available to swiftly and adequately detect and root out hacker attacks to databases and other sensitive information.

“Any organization connected to the debit and credit card ecosystem faces constant and evolving threats,” said Sandy Kennedy, president of the Retail Industry Leaders Association, in comments published in the New York Times. “The public and private sector must continue to work together to improve debit and credit card security, identify threats and share information to best defend against cyber-attacks.”

More DATA BREACH News
Among the companies having fallen victim to hackers include UPS, Goodwill, P. F. Chang’s, Sally Beauty, Michael’s and Neiman Marcus - as well as higher-profile hacks like those involving Target and now, Home Depot. A company spokesperson, Paula Drake, said on behalf of Home Depot that the breach could have affected customers in the US and Canada from this past April to just after Labor Day, a period of about five months.

No one knew it was going on.

Since the data breach was revealed, Attorneys general from three states - Connecticut, California and Illinois, are heading up a joint investigation into the hack.

Meanwhile, a proposed class-action data breach lawsuit has already been filed by plaintiffs John Solak and Dennis O’Rourke. According to court documents, the two men used their credit and debit cards at Home Depot locations in New York and Pennsylvania, with both claiming their personal information and card data were compromised.

Posted by
joan
on November 12, 2014
I was snagged by the Target breach last year-they immediately offered a year of free credit monitoring.
I find it incomprehensible that HD is totally refusing such an offer. The hassle of replacing cards,monitoring emails,etc.,not to mention of we do end up with unknown charges-I will no longer be shopping at HD even though it is closer to my home than Lowe's. The fact that they could care less about their customers is sickening in my books.
Posted by
Dano M
on November 5, 2014
Anyone in Connecticut get hacked ? Mine was in Norwalk Home Depot on Connecticut Ave. 06854. Anyone filing let me know will join the Class. Hacked my Debit Card .
Posted by
Tim Parent
on October 21, 2014
HD workers can look up c/c numbers on the pos system. go to www.hdpos.blog.com I spent 4 years in court. In WI. FED
Posted by
Eric Eskra
on September 25, 2014
My and my wife's accounts had been compromised twice by Home Depot. After getting a replacement card in late August we used it again at Home Depot and within days that new card was compromised. I have asked Home Depot for credit monitoring and protection above the one year and a choice of monitoring services. Home Depot management has said no to both requests. If anyone is interested in being a plaintiiff in my class action suit in New York State please email me.
Posted by
R Craycraft
on September 23, 2014
Society doesn't want the hassle of checks so they electronically take it from your account. That data is just as vulnerable as a debit or credit card. Everyone wants our plastic because it's fast and guaranteed money. But the data keeps getting out in the open. The only way to stop this type of problem is to make it hurt thier pocketbook. Unfortunately, that seem to be the only thing that keeps Corporate America "honest".
Posted by
Ray Watters
on September 22, 2014
This is nothing new. My bank account was debited over $1600.00 last year for four gift cards at Home Depot stores in Seguin, Texas and Katy,Texas. My bank credited my account, but Home Depot could not have cared less. One of the managers at the Katy, TX store was even upset that a Home Depot Resolution Expeditor gave me his name to contact. They didn't care when it happened to me on October 10 and 11 last year! Their “Resolution Expeditor” could get no response for nearly one month. I still have his emails. I sent three letters to their corporate office and received NO reply. I asked a lady in their “Loss Prevention” department why no ID nor PIN was required for the purchase. She said it would take too much time. Really? For transactions totaling over $800.00 each? I no longer shop at Home Depot.
Posted by
Jennifer McWethy
on September 21, 2014
I shop at Home Depot and have used my bank debit card and/or my credit cards. This concerns me greatly, as I have had to cancel several credit cards in the past for fraud. I hope HD has retained my records, because I do not always keep my receipts. I hope this is not going to be a problem for me. I cannot even access their site. My last purchase was at the Bellevue, WA store for about $105.on 8/15/14 on my credit card. There are others I am sure. The last thing I need is another battle with the fraud department.
Posted by
Samuel Lipson
on September 21, 2014
I have been a customer of HOME DEPOT for the past year and thus far have noticed no irregular charges ---nor have I noticed any of my personal information ---In Cyberspace---AT THIS TIME. However, I can change my credit card numbers---------- yet cannot change my SS # or any other personal information, which thieves stole from the Hacking of my Home Depot information
I believe that I have been damaged and would like to join the action as a Plaintiff.

Posted by
Ron Sutton
on September 21, 2014
I used my debit card from my employer paycheck program on several occasions at Home Depot. Since this is linked to my employment I am concerned what information was compromised by the breach and the number of times the information could have been accessed.
Posted by
Bill
on September 21, 2014
Interesting
My debit card and credit cards that I used at Home Depot were apparently breeched.

All were used on September 1,2,3 and the latest September 7 in Boston. The merchants stated to the investigators that the individuals had a debit card and credit card with my name account number and the 3 digit security code. Even my Target credit card was breeched.

All cards have been replaced and accounts changed.