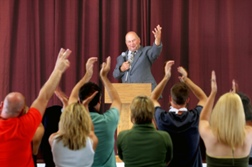 Paul, a self-admitted fan of the band, has been known to quote Rush song lyrics on the campaign trail and play other songs from the band, notably "Spirit of Radio," at his promotional rallies. As such, Paul's campaign manager, Jesse Bunton, recently told the Louisville Courier Journal that the problem was "a non-issue."

Robert Farmer, an attorney for Rush, saw things differently. "The public performance of Rush's music is not licensed for political purposes," he told the news provider. "Any public venue which allows such use is in breach of its public performance license and also liable for copyright infringement."

Lawyers for the band stress that the action is not tied to the candidate's politics, and that the letter would have been sent to any politician using the band's music without license.

This is far from the first time that a politician has faced copyright issues over music played at their rallies, as noted Republicans John McCain and Ronald Reagan have faced similar claims for rock artists The Foo Fighters and Bruce Springsteen, respectively.

If you or a loved one have suffered losses in this case, please click the link below and your complaint will be sent to an intellectual property lawyer who may evaluate your Infringement claim at no cost or obligation.
Request Legal Help Now