In yet another result of the credit crisis, the rumored sale of Wachovia to Citigroup has just come to pass only hours ago, further concentrating increased power and influence of the nation's banking industry into just 3 banks. Whether that proves a good, or a bad thing for America is yet to be determined. However, with about 30 percent of the nation's deposits the new Big Three will have the capacity to yield considerable influence—and that could be a problem for smaller banks trying to compete. 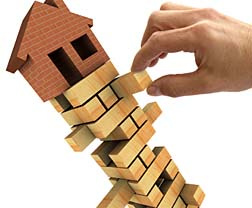 It is important to note that Wachovia, while troubled, did not fail. Spokespersons for Citigroup assure that the sale will afford a "seamless continuity of service from their bank and full protection for all of their deposits," Federal Deposit Insurance Corporation (FDIC) Chairman Sheila C. Bair said in a statement. "There will be no interruption in services and bank customers should expect business as usual."

Citigroup, one of two suitors originally vying for Wachovia, will absorb up to $42 billion worth of losses in Wachovia's loan pool of $312 billion. FDIC will have to absorb losses beyond that figure.

The good news in all of this is the prevention of another failure. With the US Government's proposed 12-figuire financial bailout of the credit crisis about to go to a vote in Congress, and with the world markets holding their collective breath, the US economy could not afford yet another failure, for reasons of both economic and confidence.

However, even though the concentration of power will be surely met with an increase in regulatory scrutiny, concern remains with regard to the newfound largess of Bank of America, JP Morgan Chase and Citigroup. Commanding, as they now do, 30 percent of the nation's deposits, provides immense power and influence. Critics fear that smaller banks will not be in a position to compete, and will have little choice but to march to the Big Three's orders and fall into line, or seek buyers.

Were any member of the newly crowned Big Three to buy up several smaller players, their power would be further concentrated.

More FINANCIAL News
The latter seems to be the furthest from people's minds, at the moment, as the ongoing credit crisis, and the feared fallout if the $700-plus billion-rescue package fails, is distracting everybody. Wachovia is just the latest victim of the sub-prime mortgage meltdown. So far this year, Wachovia's share price has plunged 74 percent, and was trading at just $10 per share on Friday.

Talks between Wachovia and various suitors—primarily Citigroup and Wells Fargo, took place in earnest over the weekend at the same time as Congressional leaders were debating the industry-wide bailout package. Obviously, it was felt that market confidence would only be bolstered by the lack of a loose end, and Wachovia would surely be interpreted as such were the deal not to have been made. But it was a fast negotiation: it has been reported that Citigroup did not get their first look at the Wachovia books until Saturday morning.

The parties involved in the negotiation worked through the weekend, into last night and into the wee hours of this morning in an effort to reach a deal. The takeover was announced just hours ago.