Two Canadian homeowners in Southern Ontario thought they couldn't lose and jumped at a chance to get a government grant to make their home in downtown Windsor more energy efficient. A licensed inspector did an energy audit of their home and recommended that Robert and Michelle Cecile contract RetroFoam to update the home's insulation. Everything looked good--a government approved plan would subsidize the project and save them money in the years ahead. 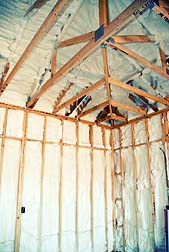 Then in February, a Health Canada bulletin in the local newspaper caught their eye. There it was in black and white—the RetroFoam spray insulation the Ceciles had sprayed into their attic and walls contained Urea Formaldehyde, a substance banned from use in insulation products in Canada for many years.

"And that's how my clients found out they had a problem," says the Cecile's lawyer Sharon Strosberg from Sutts, Strosberg in Windsor.

Attorney Strosberg believes there are at least 700 other homeowners in the area that also had their houses retrofitted with RetroFoam insulation as part of the Eco Energy program sponsored by the Canadian Department of Energy. She is currently preparing documents to launch a class action suit on behalf of Robert and Michelle Cecile and 140 other homeowners. Strosberg will argue RetroFoam and the Federal Department of Energy knew or should have known the product contained Urea Formaldehyde insulation or UFFI, as Canadians call it.

"This is not a lawsuit about personal injury," says Strosberg, "we are not alleging that Urea Formaldehyde insulation causes health problems nor are we making any allegations about levels of Urea Formaldehyde fumes in the houses."

Strosberg says this is more about property values than anything else. "Our point is that UFFI is banned in Canada and has been for years," she says. "When an individual goes to sell their home they must tell potential buyers that there is UFFI in the home and this will affect the value of the home."

"We have retained a property appraiser who will testify that homes with
UFFI declarations sell for less than their real property value," says Strosberg.

"The Ceciles were homeowners in downtown Windsor who thought they were doing the right thing by investing several thousand dollars to make their home more energy efficient," says Strosberg. Now they find out they may have done permanent damage to the price of their biggest investment.

More Consumer Fraud News
RetroFoam has been ordered to cease and desist from installing its product in Canadian homes.

Polymaster Inc. in Knoxville Tennessee, the parent company of RetroFoam, did not return calls from LawyersAndSettlements.com.

Strosberg is a thorough and determined young lawyer licensed to practice in both Canada and the United States. Her father, Harvey Strosberg, is considered one of the pioneers of class action lawsuits in Canada.

Sharon Strosberg is a graduate of the University of Windsor (B.A. Hons., LLB.) and Detroit Mercy University (J.D.). She is licensed to practice in both Ontario and New York State. Her practice areas include personal injury litigation, class actions, product liability, commercial litigation and civil litigation.