It took six years, 17,000 billable hours, three law firms and three public justice organizations, but in the end they managed to wrestle a payday loan company in North Carolina into a settling with thousands of unhappy customers. "We have had great reaction from clients," says Paul Bland, with the Public Justice organization in Washington, DC. "The settlement was a compromise. But we faced enormous legal challenges and we made the decision that this was a good settlement compared to the risks going forward." 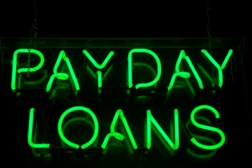 The payday loan industry is notoriously hard-nosed and has deep pockets when it comes to fighting lawsuits. However, Advance America, the largest payday lender in the US, agreed to pay $18.5 million to settle a class action suit that argued it had contravened North Carolina's state usury laws. Class members—about 140,000 Advance America customers in North Carolina—will get back at least some of the lending costs they paid out.


"Payday lending is a terrible financial product. It is almost like an addiction, like crack cocaine"
According to the suit, Advance America was charging annual interest rates of somewhere between 350 and 500 percent. "We had one client, for example, who borrowed $200. They made $2000 in payments to Advance America and still owed the principle," says Bland, who took or read at least 50 depositions in the case against Advance America and talked to dozens of expert witnesses.

Although payday lending was declared illegal in North Carolina several years ago, Advance America and many others continued to operate by creating an association with banks. In this case, it was the Republic Bank.

A recent report by federal authorities cites payday loan industry's association with both small and large banks to avoid state regulations as a problem for consumers in the US. Paul Bland says it amounts to banks essentially renting their charter for a fee.

More FRAUD News
"They aren't actually taking any significant risks," says Bland. "They aren't underwriting the loans; they are just lending their name to the payday lending company and then taking as much as a 5 percent fee. Essentially, they're operating as a shield. It's a sham operation.

"Payday lending is a terrible financial product. It is almost like an addiction, like crack cocaine. You get people taking out loans and they believe they are going to pay them off. By overwhelming margins they can't pay them off, and they end up on a debt treadmill."

This treadmill for the North Carolina Advance America customers has finally stopped.

Paul Bland has been a senior attorney with Public Justice since 1997. He has argued and won more than 20 cases that have led to important decisions for consumers, employees and whistleblowers across the US. Public Justice is a Ralph Nadir-inspired organization based in Washington, DC with an office in Oakland, California.

Click to learn more about LawyersandSettlements.com
LawyersandSettlements.com - A trusted, independent legal news provider bringing quality news and information on legal cases and lawsuits filed in the United States of America to its readers since 2002. Over 650,000 legal help requests including Consumer Frauds have been forwarded to lawyers all across to the country.