Somewhere in the U.S. this story is probably playing out right now. A driver has decided to top up the tank and pulled into a service station owned by the Hess Corporation. They slide that handy debit card into the slot and pump maybe $20 worth of gas into the vehicle and then they're on their way. 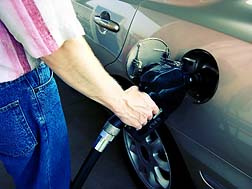 But the next time they try to use their debit card it's declined for insufficient funds. Oops! So what happened?

When a consumer uses their debit card like a credit card at a Hess gas station (they slide it into the slot and don't enter a pin number), it's company practice to put up to a $100 hold on the bank account for 3 days even if the consumer pumped less than $100 worth of gas into the car.

More than one consumer has found himself or herself wondering what happened to the money they thought was in their account after filling up at a Hess station on the eastern part of the country.

Two Florida attorneys, Jim Staack and Cameron Moyer, are currently wrangling a class action through the court system on behalf of a client who was pretty revved up after a Hess gas station drained $50 out of her account after she bought $10 worth of gas.

When Staack and Moyer's client went to buy groceries shortly after, the store clerk handed her card back to her. "Your card is declined ma'am," is not something anybody likes to hear.

"If you buy $10 worth of gas you don't expect a $50, $75 or $100 hold to be placed on that account," says Jim Staack from Staack, Simms and Hernandez in Clearwater, Florida. "When they fail to tell you what they're doing--that it can result in all kinds of nasty surprises like bounced checks, overdraft charges."

And their client isn't the only person stung by the "debit card surprise". Since they launched the suit they have heard from dozens of other people left standing at a store checkout counter with a red face because of a rejected debit card.

The Hess Corporation is one of the nation's largest oil and gas companies with drilling and refining operations and hundreds of gas stations up and down the east coast. The policy of putting a minimum hold on funds in customer's bank accounts likely affects millions of Americans at the very least.

"This goes to the very core of American law," argues Cameron Moyer of Moyer Law, co-lead counsel in the suit. "Anyone in America that makes a purchase has a right to know all the terms and conditions before they make the purchase."

Simply put, Moyer and Staack say this is an unfair business practice that violates consumer rights. "The problem here is that they have failed to adequately disclose what they are doing, because if they told you then you would know whether to go forward with the transaction," says Staack.

The case was certified as a class action last fall, but the Hess Corporation is appealing that decision. "We believe we have a good case, we think the fact that the judge certified it as a class in the first place shows that," says attorney Staack.

More Unfair Business Practice News
Staack and Moyer are seeking to recoup all the overdraft and bounced check charges for anyone who found themselves without the funds in their account they thought they had because Hess put hold on it.

"We see it as an unfair and deceptive trade practice. It's a failure to disclose to the consumer," adds Staack. "It would be fine if they told you they were doing it, but our clients and a lot of people who have called us aren't happy with this," says Jim Staack.

Jim Staack is the founder of Staack, Simms & Hernandez and has an extensive background in Real Estate and related transactional and litigation work, class actions and bank work. Cameron Moyer, from Moyer Law is a University of Baltimore School of Law graduate and specializes in appeals and appellate law, business law, estate planning and general civil litigation.

Posted by
nick
on April 21, 2013
Hess in Rochester NY are doing this as well, over the past few weeks I have tried to by a sub, pizza and been declined during my lunch break and have had to walk away hungry. I've been declined for additional gas while on E and had to have a parent come meet me and lend me money to cover until I found out that the gas stations were doing this but only after looking it up. As a college student who only makes a little money a week, this is not fair when I am budgeting my money day to day.
Posted by
stephanie burton
on April 17, 2013
I stopped at hess in south carolina and put 10 dollars worth of gas in my friends truck. Later I went online to pay my phone bill and was declined. WTF?? So I get on my phone use my bluebird app and checked my balance. I had a little over 10 dollars on my card. WTH?? So I go thru my transactions history. I see a purchase of 125 dollars at hess. There is no way in hell I spent near that much at a gas station. I'm pissed now my phone bill is late I'm being threatned of being shut off and I need my phone. I am a single mom of 3 little kids under age 5 and I put all my money on that card and cant use it. 115 dollar hold is just BS. They say use it as debit and you won't have that problem bs cus I used it as debit. For 10 dollars in gas they hold 115 who the hell are they to think they can do this to people. Apparently I had money otherwise my card would've been declined. I had to borrow food from a neighbor to feed my kids my phone is getting ready to be shut off and I have money I can't touch. This is bs as I know alot of people who depend on every dime they get. It's going on 2 days and I'm sure my neighbor is getting tired of me saying I need to borrow this or that for my kids. But I did show her the receipt from what I spent and I showed her on my app so atleast she knows I'm not lying but I feel like crap having to borrow until they release my money. But everyone I have talked to can't believe they held 115 dollars. My sister has never had this problem and she always uses her card at the pump.
Posted by
Tashae
on December 12, 2012
I went to Hess gas station after work today and used My debit card through the machine outside but as I was pumping it only went up to 28cents. I went inside to tell the lady and she tried. But it didn't work. She said it wasn't nothing on it. I told her Hun I have $50 on it try again. She did but still nothing. I called the bank and they said it will be returned to me in 2 to 5 days. I was pissed because I didn't even get gas it stopped on me but I still was charged. Wtf.
Posted by
Peter Keyte
on September 9, 2012
Hess in Port St Lucie is also doing this. Avoid their stations whenever possible
Posted by
Kerensa
on June 19, 2012
I stopped at Hess last night for $25 in gas and now have a $90 hold on my debit account for the next 3 days...my bank indicated Hess started this practice in December. I won't be stopping here anymore to say .05/gallon
Posted by
scott macdonald
on May 10, 2012
hi i got gas for my sister lastnight at hess 15$ they put a hold for 126.55 all the remainding money in my account because of this i did not have money to take public trans to work so i missed work today resulting in more lost wages i want onboard with this class action if they told me or i seen it in writing i would have never got gas there i would have went elsewhere or to an atm first and thats why they dont there afraid of loss of custumers im so beside myself right now ahhhhh
Posted by
Kevin
on February 10, 2012
My wife had this happen yesterday at the Sunoco on the corner where we live. The problem is, is that she swiped the card and then canceled the purchase without buying anything because she noticed the price difference from cash to credit and decided to go up to Stewarts where they have one price for gas cash or credit. They still put a $100,00 24hr hold on the card. This is bullshit. They need to post it at the pump like atm's do to give people a choice to continue or not.
Posted by
R Bowman
on January 23, 2012
This evening, 1/23/12, I wanted to top off my tank at our local Hess station, using my debit VISA card. I was not even given the opportunity to type in my pin number. My purchase was simply denied. I believe the word they used was "cancelled". Never got any gas.

They could lose a lost of sales this way.