Former North Arlington Mayor Len Kaiser and his wife, Barbara, have pleaded guilty to federal charges of tax evasion after taking money from political campaigns for their own personal use. 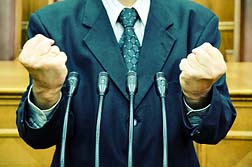 Kaiser admitted to taking upwards of $30,000 from his re-election campaign fund between 2002-2004. The money was never reported on federal income tax forms or filed on ELEC campaign contribution forms, according to the South Bergenite.

Len Kaiser served as North Arlington's mayor from 1983 until 2002. He formerly worked as a councilman, executive director of the Bergen County Utilities Authority and as a commissioner of the New Jersey Meadowlands Commission.

"The misappropriation of campaign funds and attempts to conceal such activity poses a significant threat to the political process," US Attorney Paul Fishman told the Bergen News. "Contributors to an election fund expect that their contributions will be used for the intended purpose, and not to personally enrich the candidate."

The Kaisers face a maximum sentence of five years in prison and a $250,000 fine, although the Associated Press predicts that the actual penalty will likely be less due to federal sentencing guidelines.