There's no way to know how many PayPal users have been frustrated by the online payment service's 180-day lock-down on their accounts, but attorney Julie Miller says there could be "millions of people" with the same complaint. "I've heard from people who have a few dollars locked up and others with thousands in an account they can't access," she says. Miller is representing class members in a nationwide lawsuit charging that PayPal is guilty of consumer fraud, breach of contract and violation of the laws governing the electronic transfer of money. 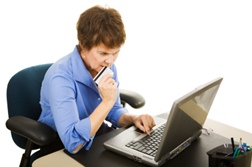 PayPal, which is owned by eBay and has been in the business of moving money online for more than a decade, has yet to respond to the complaint.

Potential class members include anyone who has had a hold placed on their account anywhere in the US.

The company is less than helpful when PayPal customers ask why the money is being held, says Miller, an attorney with the Chicago firm of Freed & Weiss. "PayPal has not been very good at working with people when there is a hold put on the account. They have a lot of hoops they want people to jump through when people call to find out what's going on.

More CONSUMER FRAUD News
"Even if they do provide all the information PayPal asks for, they still won't tell them why the account is being held. They tell them to get a court order or a subpoena if they want more information."

The suit is in its early stages and Miller can't say how many PayPal accounts are affected or how much money may be tied up in accounts. "We suspect it the amount is a pretty high number," she says.

Julie Miller is an attorney with Freed & Weiss in Chicago. She has a BS from Pennsylvania State University and earned her JD at the Indiana University School of Law—Bloomington. Freed & Weiss is a national class action law firm and devotes its practice to plaintiff representation.

Posted by
Sage
on February 11, 2019
Last month, I made a small purchase just under $50. Funds went from my credit union, through PayPal to the vendor.
I was granted a refund for a flawed product. It should have / always before has been processed in reverse order.
Paypal then said that my only option to receive it was by applying it to a future purchase.
I made 2 new purchases, just to be denied without a photocopy of my ID, SS card, mail address & bank numbers!!!
I finally researched this shady behavior online, and was blown away [pissed]!
It has not been on any news I've seen, nor mentioned within my sight on Facebook!
I'm grateful that the suit has been started, and you can count me in!

Posted by
earl waalker
on December 13, 2018
PAYPAL IS STILL DOING THIS THEY ARE HOLDING $700 DOLLARS FOR NO REASON NOBODY IS GOING TO ASK FOR REFUND I CONTACTED THEM ALL READY
Posted by
JL
on January 19, 2018
Got me for $2200
Posted by
A maples
on August 5, 2017
PayPal put a hold of 7k for 180 at least they say and now is taking 6% of every sale I make and holding it for 90 days!
I have been doing the same business for 15 years 100% positive feed back.
I have a credit line for my business and it charges more than 6.5%
So this can sink my business
My profit margin is like 10%
So I pay interest on the money they hold ! And essentially my income will drop to 3% profit margin over the next 90 days?!
Insane !
They say they don't like my business Model and it's high risk
Well I've done over a million in sales and they made money why are they punishing me for making sales?!

Posted by
Ida Carter
on August 4, 2017
I had my account limited about 4 days ago. Decided to sell my mac for school fees and just buy cheaper laptop and signed up for paypal and ebay. Not 2 hours after receiving payment after the sale, paypal permanently limited my account with no explanation other than "security issues." When i called in, the rep arrogantly tells me paypal no longer wants my business and i have to find another payment processor. I was confused. Then goes on to tell me they have to hold my funds for 6 months! Thats the part that upsets me. I could care less about paypal thinking im a securoty risk or whatever, but they have no right to hold MY money. Not for 6 months! I can understand a few days after delivery of the item, but paypal wants to give people 6 months to file a claim. It doesnt take that long to open a package and decide you dont want it and ship it back. This practice is very unfair and should be illegal. I want to file a lawsuit just beacuse this practice needs to be ended.
Posted by
Cole
on June 1, 2017
They have $20,000 of mine on hold because I sell high risk items. PayPal is a awful company and can't believe they are getting away with this.

Posted by
James kirk
on December 27, 2016
hey I called up there to get help withdrawing via check. I got the agent to do it on his end, an hr later it was reversed. I called PayPal and got into an argument with the smartass agent basically telling me to "sleep on it". I could hear the smile on his face the whole time. MY ACCOUNT WAS LIMITED!!!
Posted by
stacey
on December 13, 2016
Hi I live in the UK and PayPal put a account limit on me, I provided all the documemts they asked for and have now put a hold on my account for 180 days, they say i was too high risk to continue doing business with me! I made some diaries for a dog club 100 to be exact, all conversations were done through email, they were not sold via ebay, the lady that purchased them was goin to pay me by cheque, however 4 wks after i sent the diaries to her she told me that the clibs bank wasnt goingto write any cheques till the new year so she sent the £400 through paypal, she, by mistake sent the money twice so i refunded one of the £400, i purcased some stuff off ebay with the money, then paypal put a hold on my account, i still have no clue as to what terms and conditions i have breach and they refuse to tell me, all they say is they are holding my money for 1800 days in case someone complains about me, yet i havent sold anything on ebay ive only purchased!
Posted by
nicholas
on November 22, 2016
been selling successfully for about 4 months now, a few thousand $$ in revenue.

First time they put my funds on hold were for some expensive items, understandable because i was "new" and my "behavior" had "changed" (eBay buyer for over a decade) - but what irked me then was I had to call and complain because they'd held over $600 for almost a month - the rep acknowledged this was a "glitch" and after I played games with her and her colleagues in "support" the funds were released.

fast forward almost two months later and they are holding my funds again. even two+ weeks after items have delivered.

*NOW* the criteria i must meet: "you have to sell four more items."

i've stopped paying postage in advance because jesus christ that gets expensive especially when i cannot touch funds paid to ME for goods i'm selling. they walk like a bank, talk like a bank, donate to political parties like a bank, but dont get regulated like a bank.

must be a duck?

-Dear Buyer I wanted to go through with the transaction but Paypal will not release the funds, and I have a perfect selling record!
and if I sell something I expect to get paid before I go through all thetrouble of cleaning/boxing & shipping,, I refuse to use paypal agian until they change their
policy back to what it was when I agreed to use them in the partnership / working agreement
that paypal and I entered into...sorry about your inconvenience .
Tony England


Posted by
Robert Cerveny, Jr.
on April 8, 2012
I had over $1000 on hold for a long time for no reason as they would not give me one. I contacted the law firm here and was placed on the lawsuit. A little while later they did refund my money. I have since closed both my paypal and ebay accounts. Ebay is the culprit even though by law,they are 2 seperate entities. This is not legal in me book.
Posted by
John
on January 14, 2011
i just got my account put on hold. i have been reading a lot online and there are so many people like me. im not gonna be the one to step up and sue them but someone needs to. they either need to become like a bank with all the rules of banks, or just shut down completely. and whatever happens to people with PayPal is usually also happening with PayPal. they are linked and they screw you over from 2 sides. Please Someone just saw them already
Posted by
John Kasza
on January 12, 2011
I have had my account put on hold and I have had my acct billed because of so called listing fees. I was billed for the listing fees over and over and I couldnt talk to a Rep about it Thank goodness I only had 54.00 in my pay pal they left me with 9.00. They billed me for listing fees 3 times and the fees became larger each time. I quit using ebay for that reason and when I talk to others I know that use it say the same as I do that ebay needs to be investigated and shut down!!!