Yogurt Company Target of Class Action and There Will Be Blood

Extraordinary claims made by the Dannon company about the benefits of its probiotic yogurts are about to be tested in a class action law suit filed on behalf of consumers represented by attorney Tim Blood from Coughlin, Stoia, Geller, Rudman & Robbins.

According to the documents filed by Blood, Dannon spent $100 million promoting clinical benefits of products the company knew were from its own testing, were false. 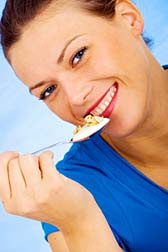 Dannon's advertising claimed the probiotics in its DanActive and Activa Yogurts
were "scientifically" and "clinically" proven to "regulate your digestive system."

The probiotic message was very appealing to consumers. In just two years, the company earned an estimated $428 million from sale of its DanActive and Activa yogurts in the US.

One of those consumers who bought into the Dannon marketing strategy was Patricia Wiener, a 45-year-old health conscious American, and a discerning consumer from California.

"Patricia Wiener is one of those people who reads the labels on everything she buys," says her lawyer Tim Blood.

"Even though she noticed that the yogurt contained a lot of sugar, she decided it was worth those extra calories to get the digestive benefit," he says.

The yogurt was also about 30 percent more expensive than other products.

It was not long before Wiener decided she could not see any difference between Dannon's probiotic yogurts and other yogurts, and began to doubt the advertising claims.

Blood is an experienced consumer protection and litigation lawyer with lots of wins under his belt, but this case is particularly appealing. "One of the things that attracted me to case," he says, "is that these are advertising claims, directed at people who are trying to do the right thing."

He describes the Dannon case as a straightforward consumer protection and deceptive advertising case where the facts are clearly on the plaintiffs' side.

"We have looked at all the scientific studies," he says, "and retained experts and we just don't see how Dannon can really claim that their advertising is accurate."

The class action certification hearing is scheduled for September 22, and Tim Blood expects a decision will be made soon after that. Blood says he expects the Dannon will fight the class action every step of the way. "I think our biggest challenge is that Dannon makes so much money from these products that it will fight this case endlessly."

More News
If the litigation against Dannon is successful, it could force the company to refund millions of dollars to customers. The claim also asks that Dannon be ordered to replace the misleading advertising with accurate information.

Refunding money to some many class members would not be that difficult according to Blood. "Any money left over," he says, "would go to one or more charities related to the subject of the lawsuit."