The word Mercedes kind of screams out at you – exclusive, prestigious and quality are words that quickly come to mind. However, you can also add lawsuit and consumer fraud as words now connected with the quintessential luxury automobile company. Attorney Jonathan Selbin from the New York firm of Lieff, Cabraser, Heimann & Bernstein has just turned the ignition on a national class action suit against Mercedes USA, alleging the car company took a lot of people for a ride when it sold them vehicles equipped with soon-to-be-obsolete analogue emergency response systems. 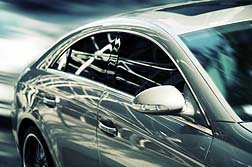 "My client was pretty upset when he got the letter saying 'your service has been discontinued'," says Selbin, "'and if you want to continue you will have to pay to upgrade to digital service'."

Prior to certification of the class action suit on behalf of his client and potentially thousands of other Mercedes owners, Selbin says, "We deposed a number of people and obtained a lot of documents and sales records that support our claim."

The claims states that Mercedes USA knew as far back as 2002 that its analogue Emergency Response System (ERS) would soon be outdated and have to be replaced with a digital system. "It wasn't a question of whether it would happen, they knew it would happen," says Selbin. " It would have been fine if they said to people, 'You are about to pay money for this service and it looks like it is going to end in a few years,' but that is just not what happened."

Selbin speaks in a refreshingly clear manner—the kind of very accurate, but also very understandable conversation that comes from a natural born intelligence--not to mention a law degree from Harvard. "From our perspective this is a basic consumer fraud case," he says. "We think Mercedes USA knew something they should have disclosed and as a result, our clients and thousands of folks like them were forced to pay additional money they shouldn't have to pay."

As for Mercedes USA, they're appealing the class certification. Selbin will be appealing right back at them if Mercedes manages to convince an appeals court to hear the case.

Although, as Selbin says, this is a straight up consumer fraud case, the fact that it involves luxury auto owners does put a little extra shine on it. However Selbin, an attorney who specializes in consumer fraud, says the fact that the owners of the vehicles are likely well positioned financially doesn't diminish their claim in anyway. "All kinds of people get swindled," says Selbin, "rich and poor and no one should be subjected to these kinds of practices."

More Consumer Fraud News
"I think consumer fraud by a big corporation in this day and age is something that everyone can relate to," Selbin adds. "I think we have all felt like we have been ripped off by a company and sometimes those things really happen and sometimes it is perception."

In this case, Selbin says, "it really happened. Mercedes made a conscious decision and they knew this was coming up and they decided to pitch this as a technology upgrade and sell it rather than address it."