, Attorney Darren Robbins and a small army of lawyers at Coughlin, Stoia, Geller, Rudman & Robbins have brought dozens of corporations and their naughty executives to their knees on behalf of shareholders who "got mad as hell and refused to take it anymore" when execs "chowed down" on money that didn't really belong to them. The firm is a noted American super law firm with offices in nine cities, from Los Angeles to New York, with hundreds of wins on the books. 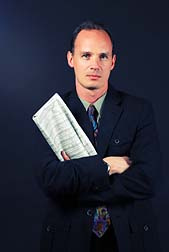 Most recently, Robbins wrote to Treasury Secretary Timothy Geithner advising him that three high profile pension funds have directed him to take appropriate steps against the American International Group Inc. (AIG) board of directors that allowed $165 million in retention bonus money to be distributed to AIG executives.

AIG, which is 80 percent owned by the US government, has received at least $170 billion in bailout money.

The answer is no—no answer from Geithner.

As to the status of the AIG lawsuit, Robbins says, "We are continuing to prepare on behalf of three public funds. We have not publicly filed a document yet and that is all I can say right now."

If you're a corporate executive who participated in the excesses of executive reward payments during the last 20 years or so, Darren Robbins and his partners at Coughlin, Stoia, Geller, Rudman & Robbins are the kind of lawyers that can make you wish you were never born. Robbins has a master's degree in economics and graduated from the Vanderbilt law school and he's been chasing down corporate malfeasance for a decade and more. In some cases he's been able to pull money right back out of the pockets of greedy executives.

"The focus on abuse of corporate compensation is kind of front and centre at the moment, but it is not something that is brand new," says Robbins.

Release the Hounds
The recklessness of corporate executives may have been getting a lot of headlines recently, but as Robbins points out investors have been making loud barking noises for quite a while. "There is an increased focus on inappropriate efforts of corporate executives to extract personal profits at the expense of corporations," says Robbins, "but I think the real genesis of this goes back 6 or 7 years to E*trade where Mr. Cotsakos was forced to give back millions and millions of dollars."

Robbins is referring to the one time Chairman and CEO of E*trade who was taken to court in 2002 and ultimately forced to repay some of the outlandish compensation he had received. In 2001, he accepted $80 million in compensation even though E*Trade lost $241 million and its share price had tumbled from $70 in 1999 to around $10 three years later. Needless to say, a lot of people thought Cotsakos had been overpaid.

More Financial Fraud News
"We did the same thing in the United Health case which is now pending court approval where we forced a $30 million disgorgement and forfeited $107 in stock options," says Robbins

Seems you can call them names, embarrass them, jail them but nothing hurts as bad as yanking back the money.

"It's a paradigm shift," Robbins goes on. "You can see it on a monthly basis the way shareholders are advocating for themselves and pursing litigation. I think it is going to be permanent change. Shareholders just won't stand for this anymore."