Attorney Brian Maul says he has had several phone calls this week from people who would like his help, after he won a whooping $1.25 million in compensatory and punitive damages at trial against the Wells Fargo Bank on behalf of woman who was a victim of the sub prime mortgage debacle.

"I am sure there are others out there who went through the same or similar situations. It probably goes without saying that there are other lenders that had the same kind of lending practices," says Brian Maul from his office in Frederick, Maryland. 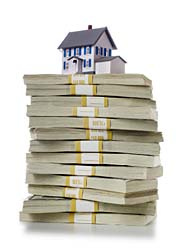 If there are other stories that match Kimberly Thomas's situation, 28-year-old Brian Maul may turn out to be a very busy young lawyer.

Kimberly Thomas works as an independent contractor doing research for the federal government, and earns about $90 thousand a year. When she approached the Wells Fargo Bank in 2006 to get a mortgage, she made several things clear. She wanted a fixed rate mortgage, and she could not afford monthly payments in excess of $3000 a month.

"From the bank documents we have seen," says Brian Maul, "there is no way she would have qualified for any kind of mortgage under those terms."

The case shines a light on just how the sub prime mortgage industry strangled so many Americans. Loan officers worked strictly on commission at Wells Fargo," says Maul. "Some of them, in the sub prime heyday, would typically close three to six deals a month. For each mortgage they sold, they earned $2000."

In other words, loan officers had a big incentive to make sure people qualified for mortgages, even when it was clear they did not. "In Kimberley Thomas's case," says Maul "the loan officer recorded her income as $157 thousand a year, and even though Thomas only had $3000 in her bank account, the loan officer wrote down $30 thousand."

The 2005 tax return that Kimberly Thomas provided, showing her income to be $85 thousand dollars a year, was disregarded.

The day she went to sign the mortgage, Thomas saw that the interest would be ten percent, not the seven percent she was expecting. The payments would be $4700 a month, not the $3000 she told the bank she could afford.

"She thought there must be some mistake," says Maul, "but everyone was urging her to sign the papers, and so she did."

The next day, Thomas called the bank and said she thought there must be some mistake. "They said they would look into it," says Maul, "But they never did."

Thomas never moved into the house, and a week after she signed the mortgage, she put the house up for sale. "She knew she couldn't make the payments," says Maul.

More CONSUMER FRAUD News
After a year, with the bank constantly threatening to foreclose, and making repeated collection calls, Thomas finally managed to sell the house, but for $90 thousand less than she paid for it.

Thomas clearly went through the sub prime mortgage meat grinder. She was under so much pressure from the situation she was taking medication and receiving counseling. The jury awarded her $250 thousand in compensatory damages for her pain and suffering. The $1 million was for punitive damages.

"These mortgages were being sold on the secondary mortgage market," says Maul, "so banks didn't really care whether the person could afford to pay or not."


Brian Maul received his B.A. with Distinction from the University of Delaware in 1997. He earned his J.D. from the Washington College of Law of American University in 2000. He became an associate with Gordon & Simmons in 2003.