Nutella Has Been Served—with a Lawsuit

San Diego, CA: Nutella, the hazelnut and chocolate spread created by an Italian company and marketed to North Americans, is the target of a consumer fraud lawsuit ignited by a Mom from California after she began to doubt its claims as a healthy and nutritious food. According to the statement of claim, Athena Hohenberg was shocked to hear that Nutella was, in fact, little different than feeding candy to her four-year-old. 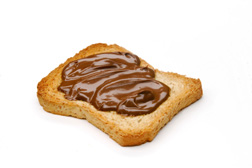 "It is false advertising and an unfair business practice," says Marron. "They are advertising this as healthy, and Nutella knows it isn't."

"Nutella has marketed itself as 'Europe's peanut butter' made from hazelnuts and a little bit of dark chocolate." However, Marron says, nothing could be further from the truth.

In the statement of claim, the suit alleges that Nutella contains over "55 percent processed sugar and dangerous levels of saturated fat."

Nutella is manufactured in the US by Ferrerro USA, a subsidiary of the Italian company Ferrerro International. A Nutella spokesperson recently told The Wall Street Journal that it "stands behind the quality and ingredients of Nutella and the advertising of its product."

Marron believes that the discovery process will reveal internal communications that show a company anxious to market its hazelnut and chocolate spread to children in North America, and anxious to convince parents Nutella can be part of a "balanced diet."

"I don't like the way they market this product to kids," says Marron, from the Law Offices of Ron Marron. "The company says this stuff is healthy, but it just isn't."

"And when you are a foreign corporation and you come into a country and use a different formula to manufacture your product, I think that is a problem," says Marron. "I think that the science will show us that the formula in North America is less wholesome here than it is even in Italy and Europe."

"Nutella doesn't abide by our advertising laws and markets the stuff to kids and parents as nutritious. I think that is a problem too," he adds.

The suit asks the court to force Nutella to discontinue marketing itself as a healthy food and asks that everyone who purchased Nutella be reimbursed for the cost of the product.

That could be millions of Americans, many of whom bought the product multiple times. "Yes, that's true," says Marron. "But I think anyone who bought this product with a false label on it should be able to get their money back."


Ron Marron is a veteran attorney who won a number of significant verdicts and settlements for clients. He is currently litigating a class-action consumer lawsuit against Quaker Oats for its nutritional claims. Marron has expertise as a securities and investments attorney, and has successfully represented clients in disputes over variable annuities, medical insurance, broker misrepresentation and negligence, and other related financial issues.

Posted by
Darlean Ashby
on April 10, 2015
Is the mom stupid seriously lol we all no its not healthy lol is she saying she doesn't feed orange juice or chocolate to her kid... Goodness me I LOVE NUTELLA... If u think its unhealthy DONT BLOODY BUY IT
Posted by
tatyana
on April 10, 2015
This lawsuit makes all the nutella consumers look like idiots. I have been eating this since 6 years old, even then I knew that a chocolate, sugary spread is not healthy.
C'Mon people! Don't be ridiculous!
Posted by
Mel
on April 9, 2015
For the record, saturated fats are the best fats for you. If you don't take my word for it then read this book. It'll open your eyes.

The Fat Revolution by Christine Cronau.

Posted by
Julie
on January 11, 2013
It is wrong to change the product and put out false advertising, but it is also the responsibility of the consumer to educate themselves on what they are putting in their body, turn the jar over and read the lable!!!! I love Nutella but knew that the commercial was a big fat lie saying it was healthy. So many people act like sheep and just brainlessly watch commercials and buy products without thinking. It's really stupid. No consumer should get their money back for buying it, it was their own choice to blindly buy this product.
Posted by
Ana Michelle Calingasan
on May 3, 2012
im so dissappointed !! because every day, every morning my 2 kids breakfast is nutella, i thought it is a healty food to my 2 kids !! that so unfair!!
Posted by
Brian
on April 26, 2012
How could anyone think that chocolate is healthy? Because the advertisements did not state the sugar content? Neither do snickers bars. Do people assume those are healthy too? I've found no claims other than by customers that Nutella is healthy. Anyone that just arbitrarily decides that a food is healthy because the manufacturer doesn't make claims otherwise and eats "tons" of it based on nothing (come on its chocolate!) is just a moron. Look at the nutritional label. Should I sue Nike because I bought their shoes and did not get drafted to the NBA. They never said i would, but they may have alluded to it. If you think 100 calories per tablespoon is healthy that's your prerogative but don't get upset because you were to ignorant to turn a jar around and read the other side. Peoples idiocy amazes me.
Posted by
Anabel
on October 26, 2011
C'mon! What about common sense? What about reading the list of ingredients? The first one is coconut oil!
Posted by
ghfghfgh
on July 29, 2011
D: I am soo sad! I loved this stuff and ate TONS of it! I thought it was healthy. :\
Posted by
gloria cirolo_wright
on June 17, 2011
I have purchased Nutella for a year thinking it was nutritious and a healthy choice. I am very angry over this issue and find it disgusting to make a false claim on a product. I have wasted much money .