A Tale of Two Cipro Victims

From the number of complaints LawyersandSettlements has received regarding Cipro and its link to tendonitis and tendon ruptures, these side effects aren't so rare as the manufacturer indicates. 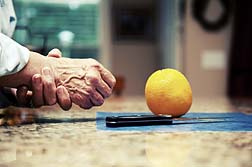 Jeff has taken Cipro "off and on" during the past 10 years for urinary tract problems and he has experienced several bouts of tendonitis in many areas. " I dealt with a severe case of tendonitis in both shoulder biceps just after I was through with Cipro last fall but it took about 10 months to get over it," he says. "I also suffered from tendonitis in both thumbs and elbows. This antibiotic really makes me wonder. I certainly know the last time I took it, my shoulder tendonitis happened just a few weeks after finishing the prescription.

"I first read about Cipro and its association with tendon ruptures in the newspaper—a doctor has a regular column and he acknowledged the connection between Cipro and other drugs like it [other fluoroquinolones such as Levaquin and Avelox] and tendon injuries.

When I found out, I was mad at my doctor and my pharmacist. I didn't read any warnings with my prescription, at least not the ones I got. I was given no warning whatsoever. And this last bout was really bad—I was almost crippled. I even had to get cortisone injections from the specialist and still feel some lingering tightening, I'm not 100 percent healed. And I still see a massage therapist. Both my doctor, a specialist and a physical therapist confirmed that I have biceps tendonitis in both shoulders.

More CIPRO News
Of course it is possible that an injury triggered it. I took Cipro just before I went on a canoeing trip but I still wonder if the drug caused it, period. Granted I am very active (I'm 55 and take good care of myself) and maybe it is just a combination of overuse and the Cipro combined; right now I am just speculating but it has made me cautious about future canoe plans…"

Nathaniel says he was prescribed Cipro for prostrate problems. "I took two courses of this antibiotic—one lot for a month and again just before I had a biopsy for prostrate cancer," says Nathaniel. "It must have been a few months after that when I got a pain in my left shoulder, then my left leg and both wrists. The doctor said I have tendonitis and now I'm on painkillers. I had no idea that Cipro was connected to these injuries until I saw something on TV about Cipro.

I told my daughter about this TV ad; she went online and discovered I had the same side effects. Wow, I was surprised and shocked to find out that an antibiotic can cause tendonitis and tendon ruptures."