Chinese Drywall Homeowners Finally Getting Their Due

The Chinese drywall debacle is finally coming to an end for dozens of homeowners in Florida stricken with the substandard drywall. Not only will they have their homes repaired, but also their attorney's fees and other expenses will be covered. Another victory for the homeowners is that they won't have to reimburse the manufacturer if less than 95 percent of the drywall in their homes turns out to be product other than that manufactured by the defendant. 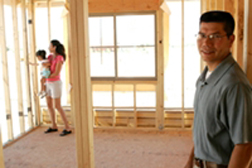 The Miami Herald reported November 24 that not only has Knauf Plasterboard Tianjin agreed to repair the homes, a Miami-based supplier of drywall offered a settlement days before a class-action lawsuit was slated to go to trial.

The lead plaintiffs in the China drywall case were Jason and Melissa Harrell of Homestead. Shortly after moving into their two-story home, they encountered the now all-too-familiar odor of the defective drywall. What's more, their appliances were breaking down.

Theirs' became the first class-action case filed in the country over the problematic drywall, imported from China by many suppliers in the midst of the recent building boom when drywall from traditional US-based sources became scarce. In total, some 3,700 complaints from 40 states, the District of Columbia, American Samoa and Puerto Rico have been filed with the Consumer Product Safety Commission (CPSC). Most have originated from the Sunshine State.

It has been anything but sunshine for the affected homeowners, many of whom found their homes totally unlivable given the noxious fumes originating with the defective Chinese drywall.

There have been settlements. South Kendall Construction and an affiliate, Palm Isles Holdings, agreed to a $4 million settlement, according to the Miami Herald. Keys Gate Realty settled for $2.6 million and Atco, the contractor that installed the drywall, paid $375,000.

More CHINESE DRYWALL PROBLEM News
The amount extended by Banner Supply to some 79 homeowners whose houses were rendered unlivable was not disclosed. However, sources close to the situation noted that the total amount contributed by all parties reached $9 million, which appears to suggest the Banner settlement may have been around the $2 million mark.

Knauf Plasterboard Tianjin has offered to remediate hundreds of homes in Florida, Alabama, Louisiana and Mississippi. In addition to the repairs, it was reported that Knauf will pay each homeowner $8.50 per square foot of his or her home in lieu of expenses.

Homeowners affected by drywall problems were forced to deal with a strong, sulfur-like odor emanating from the walls and ceilings of their homes. Copper coils associated with refrigerators and air conditioning units would turn black. Many families had to abandon their homes altogether.

If you or a loved one have suffered losses in this case, please click the link below and your complaint will be sent to an environmental lawyer who may evaluate your Chinese Drywall Problem claim at no cost or obligation.
Request Legal Help Now

Posted by
Consteducator
on November 29, 2010
Determining that a home or structure contains defective drywall is just the beginning; the next step is to correct the issue.

The Building Envelope Science Institute (BESI) endorsed a remediation protocol back in October 2009 that more than exceeds the recommendations by the CPSC & HUD interim remediation guidance and is aligned with the court's ruling in the MDL-2047 litigation case (even more comprehensive).

The protocol offered through BESI provides (to-date) the most comprehensive remediation process and was developed based on proven science. The principal protocol for remediation of defective drywall being taught by BESI considers the following major factors: corrosion, cross-contamination of other building materials, personal belongings, IAQ monitoring program, a national warranty (not an insurance policy), and removal of the stigma from having defective â€œcorrosiveâ€ drywall.

In fact, the institute has been certifying qualified candidates for inspection and remediation of structures with defective drywall since October 2009. Those that have earned a designation as a remediator or consultant through the institute have attended a two-day course with a written final exam; inspectors attend a one-day course with a written final exam. There are prerequisites they have to meet, which includes being in good standing with the state if they are licensed (required for those performing remediation).

Itâ€™s good to know that if your home was remediated under this protocol that it would not require more work in order to meet the CPSC & HUD interim guidance. The Institute has a â€œNationwide Directoryâ€ that currently allows individuals to locate BESI certified inspectors and remediators for defective drywall; over 125 qualified individuals.

The Building Envelope Science Institute (BESI) is a specialized institute dedicated to the advancement of education, specifically designed for the construction industry. They have been leading the way for inspection & remediation of Defective (Chinese) Drywall over the past year; by introducing one of the first protocols for inspection and remediation.