If you have Chinese drywall in your home and your homeowners insurance policy is up for renewal, read the fine print. A Virginia judge recently issued a ruling that will make insurance coverage more difficult to obtain and likely more expensive for homeowners with toxic drywall. 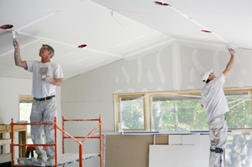 A Florida couple was recently awarded $2.4 million in damages for the costs of renovating their home due to Chinese drywall along with damages for loss of enjoyment of their $1.6 million house. In another suit, seven families in Virginia were awarded $2.6 million in damages. But where is the money going to come from to pay for these verdicts if the defendants—such as drywall distributor Banner Supply Co., which has been named in thousands of lawsuits—are not insured?

If you suspect Chinese drywall, get it checked by a qualified inspector sooner than later. After receiving significant claims from contractors, manufacturers and distributors such as Banner, a number of insurance companies and carriers are adding a new clause for their policyholders that specifically excludes toxic drywall. Some insurers are arguing that Chinese drywall falls under a pollution exclusion clause, and that the pollution exclusion on their policies implicitly excludes tainted drywall.

More CHINESE DRYWALL PROBLEM News
And this pollution exclusion clause does not just affect contractors and distributors. Judge Robert Doumar, in the federal court in Norfolk, VA, held that installation of defective drywall was a "direct physical loss" under terms of the insurance contract, meaning the loss is covered (Travco Insurance Co. v. Ward). He also found, however, that several exclusions apply that will nullify coverage for the drywall. The court held that the following exclusions apply to the homeowner's claim:
It may not be your contractor's fault. Chances are, when he installed Chinese drywall, he was likely not aware that he had a pollution exclusion to cover.

In the wake of Judge Doumar's decision, Evanston Insurance has filed a coverage action in the same court. The insurer recently filed a declaratory judgment action against real estate developers involved in the multidistrict Chinese drywall litigation in New Orleans, but it filed the case in Norfolk because of the judge's ruling with Travco Insurance Company.

It may be a good idea to discuss your insurance policy with your attorney.