A US District Court judge in Louisiana has delivered a landmark ruling in a Chinese drywall lawsuit, ordering a manufacturer of the defective drywall to pay a total of $2.6 million to seven Virginia families toward the remediation of their homes. 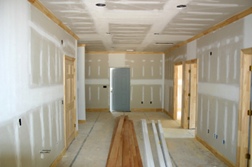 The trial is the first in a series of lawsuits alleging defective drywall. The defendant in the case, Taishan Gypsum Company Ltd. is headquartered in Tai'in, China.

A building boom mid-decade, together with the devastation wrought by a string of hurricanes along the Gulf Coast, resulted in a massive shortage in supplies of drywall normally originating in the US. To make up for the shortfall, contractors turned to China. Since then, there have been ongoing reports of drywall emitting noxious fumes and corroding wiring and plumbing. For some homeowners, the fumes have represented a health hazard, impelling them to abandon their dwellings entirely.

More CHINESE DRYWALL PROBLEM News
Some recommendations for remediation have included stripping a home down to the foundation, given the suspicion that chemicals in the drywall can seep into structural studs and beams. Spraying or affixing a sealer to the facing side of the drywall would only serve to contain the fumes and would do little to fix the wiring, copper plumbing and air conditioning coils turned black by the drywall. Noxious fumes could also escape and congregate in other areas of the dwelling.

Sealing the defective drywall has never been actively discussed as a viable option. In his ruling, US District Judge Eldon Fallon specifically identified the need for complete removal of any pieces of Chinese drywall in the home, together with any fixture or item damaged by it.

The Associated Press reported Judge Fallon's ruling late on April 8. The decision in favor of the plaintiffs could affect thousands of other US homeowners who find themselves in a similar situation.