Defective Chinese drywall continues to be a source of frustration for many homeowners. One Florida family was forced to vacate their three-year-old house because of defective drywall—now they're going to court to fight back against the drywall manufacturers. 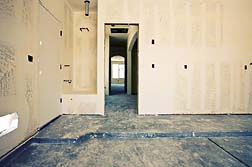 Melissa and Jason Harrell, of Homestead, filed a lawsuit against South Kendall Construction, Palm Holdings, Keys Gate Realty and Banner Supply in March. The Harrells had to vacate their home, which was built in 2006, after the Chinese drywall left their entire family with breathing problems and headaches. The home smelled of chemicals and the coils of their air conditioning system became corroded.

The Miami Herald reported recently that the Homestead couple won the right to sue after the Third District Court of Appeal ruled on December 23 that Banner Supply had sufficient opportunity to inspect the family's home and to make an offer to affect repairs.

Earlier, a judge had ruled that the Harrell family could sue for damages beyond the cost of the repairs. The family was given the legal clearance to sue for loss of value to their home, costs associated with alternate housing and the extensive remediation required to make the house healthy—including new pipes and new appliances.

The clearing of legal roadblocks for this family, as well as the looming January 15 deadline for homeowners to join three more lawsuits that are expected to be filed in a New Orleans federal court by mid-February, should see more litigants jumping into the fray.

Government asks mortgage lenders to give drywall victims a break

On December 22, the US Department of Housing and Urban Development (HUD) asked lenders who own Federal Housing Administration (FHA)-backed mortgages to give borrowers who have toxic Chinese drywall a break.

More CHINESE DRYWALL PROBLEM News
"We're instructing our FHA mortgage lenders nationwide to extend temporary relief to allow these families time to remove problem drywall and repair their homes," FHA Commissioner David Stevens said. "We want to remove additional pressures for these families as they find solutions to allow them to return to a safe, decent and sanitary home."

Rich Kempf, whose Cape Coral house was built in 2006 and 2007, said HUD's action is a good beginning, but the most urgent issue is how local governments can get federal loans and grants available to help people get rid of the bad drywall.

The Consumer Product Safety Commission is considering whether it should require all foreign and domestic drywall manufacturers to put more-detailed information on their product, including when and where it was made.