LAWSUITS NEWS & LEGAL INFORMATION
Home Page >> News Articles >> Chinese Drywall like Being up Against a ..

Chinese Drywall like Being up Against a Brick Wall

Randy built a spec home in 2007, just before the housing market took a dive. Too late to sell, Randy opted to rent the house. Since then, the air conditioning coils have been replaced and his current tenant has complained about a foul odor. "We had a thorough inspection and it was determined that we have Chinese drywall," says Randy. Now, he has lost the rental income and can't afford to fix his home. 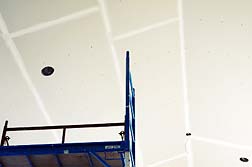 "Many people can't afford to fix their homes—they will just walk away, they'll have no choice."
"The home inspectors pulled all the switch and receptacle covers and checked the ground wires for oxidation," Randy says. "They also pulled the A/C cover panels and checked the coils; they checked under the sinks for the copper shut-off valve—most of the coils and wiring were either black or in the process of turning black.

"Since then I have contacted the builder, the county property appraiser's office, my insurance company, the bank and several attorneys.

"The builder is a 'boutique style' builder with a small company that specializes in the type of home we wanted. He was already aware of the drywall problem and had complaints from other homes. He said he wouldn't be surprised if every home he built during that time period had contaminated drywall. Business has been slow for him and he is planning on shutting his doors—I think he is going to file for bankruptcy.

"The Florida Property Appraisers are trying to help people by re-evaluating the appraised value of the home. They came out to our house and did an inspection. Ssince then I received a letter saying that they have lowered the structure value of the property, but not the property itself, by 50 percent. My property taxes were supposed to be about $8,000 this year so I think this will reduce it by $2,600.

"Homeowners denied our claim on the grounds of defective material. Based on that, we've given the insurance policy and a background of information to an attorney who is going to review it. He thinks the best avenue of approach is to go after the insurance company...

"As for the contractor, he sent me the name of the company that provided the drywall, and they have gone out of business.

"I contacted customer service at Bank of America. They acted like they never heard of Chinese drywall before. I wanted to talk to someone about the possibility of getting assistance when I lose my rental income. I have a great history with them but they basically blew me off.

More CHINESE DRYWALL PROBLEM News
"For some, there is cautious hope that somehow the government will step in and help but I'm not optimistic. They are saying there are between 30,000 and 50,000 homes in Florida built with Chinese drywall. When you add that to an already depressed housing market, Chinese drywall is going to drive the price of housing down even more. Many people can't afford to fix their homes—they will just walk away, they'll have no choice. I certainly can't afford it. And we aren't even trying to rent the house again because there could be legal issues.

"This whole thing is so frustrating. Not too far from me is a retirement community called Sun City. There are a lot of people living in homes with this toxic drywall, people who spent their life savings to build these homes or some got reverse mortgages. Now they have nowhere to turn.

"I've heard people on radio talk shows chastising people who built homes with Chinese drywall for an investment, like we did. But these investments fuelled the economy—I just hope the government can help us."