About 100,000 homeowners nationwide are dealing with the problem of defective Chinese drywall and the resulting foul sulfur odors, repeatedly failing HVAC units, corrosion of wires and other exposed metal objects, and mysterious appliance failures. The Chinese manufacturers and have admitted that drywall they sold between 2004 and 2008 may be defective. The solution—which includes the replacement and disposal of all drywall in the home—is expensive and time-consuming, and thousands of homeowners have turned to the legal system for help. Now, an important deadline is approaching. 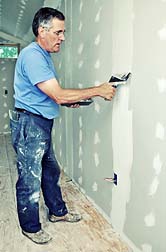 Knauf Lawsuits Should Be Filed by December 9, 2009

Federal lawsuits have been consolidated into a single massive case currently being heard in New Orleans. Many Chinese manufacturers are being sued, but the biggest defendant is a German-owned group of Chinese manufacturers known as Knauf. There are many procedural hurdles involved in suing a foreign company, but "Knauf has agreed to accept service of a single complaint against them," says Chinese drywall attorney Bill Cash. Anyone who has used Knauf drywall in their home should file their claim on or before December 9, 2009, in order to take advantage of Knauf's offer. Homeowners who file claims after this date will have to go to the back of the line and will bear substantial expenses in having their complaints translated into Chinese and then hand-delivered to the Knauf defendants. Costs could exceed $10,000 per homeowner.

Knauf may be the main producer, but there are a number of other Chinese drywall manufacturers as well, Cash said. "We have documentary proof that defective product was produced by other makers, and there are potentially 30 to 40 distinct defendants in this case. Families whose homes were built with bad Chinese drywall made by another company besides Knauf may still have a claim."

How can you determine whether your drywall is contaminated? Sometimes the drywall will be stamped "Made in China" or with the name of a company or certain codes, and sometimes there are no markings at all. "The drywall maker can be determined in a few ways," explains Cash. "Most drywall is sold with color-coded paper tags that wrap the ends of the drywall boards, called end-tabs. If there are no markings or end-tabs, shipping records or builder invoices can be used to determine the maker."

Because the Chinese drywall problem has gotten so much attention, particularly in Florida, inspectors and companies have begun advertising their services directly to homeowners. These companies offer to test whether a home contains Chinese drywall, but Cash advises against these. "If it sounds too good to be true, it probably is. Any quick-and-dirty testing procedure involving a few scrapes of drywall dust isn't going to get the job done." Tests performed by companies that don't use the federal courts' detailed inspection protocol aren't valid in federal court and will probably need to be redone later.

More CHINESE DRYWALL PROBLEM News
Desperate homeowners are also being offered some quick fixes from independent companies who claim they can cure the problem. These "solutions" include bleaching the drywall with chlorine gas, painting and spackling over it, inserting metallic sulfur attractors, and even covering it with magnetic black "pixie dust" (as one company calls their product). "None of these products works, and the government has not even tested any of them, let alone approved one," said Cash. "I actually have an employee who has Chinese drywall in her home. Her homebuilder suggested using one of these products, and she agreed. Months later, she is still out of her home, but it is now contaminated with both defective drywall and these unknown chemicals." Other homebuilders are trying other methods.

Homeowners should seek the advice of an attorney before considering any offer from a homebuilder. And anyone who is considering a lawsuit should also talk to an attorney who is experienced and qualified to file a claim against foreign manufacturers and other responsible parties.