According to Home Inspector Oran Venable, Chinese drywall is showing up in Texas as well as Florida and Lousiana. "I'm seeing homes with Chinese drywall in Austin, Dallas and further east that were built around the same time that contaminated drywall hit US shores," says Venable. 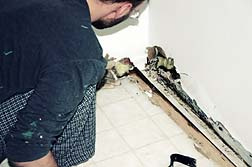 "I've done numerous inspections in Louisiana, mainly after Katrina, both for damage and later repairs," Venable adds, who has worked on insurance claims for Louisiana homeowners and their attorneys. "Later we have covered repairs and many types of defects because of this problem."

Venable explains why Chinese Drywall is surfacing in some areas sometimes years after it has been installed. "After the drywall had been in a home for a period of time, it got wet through humidity and began to emit sulfites. This caused corrosion on internal parts of air conditioners, electrical wiring and some electrical appliance complaints." Makes sense: that would in part explain why the problem first surfaced in the more humid states.

Who Is Responsible for Chinese Drywall?

That is the big question regarding Chinese drywall lawsuits. Venable says that going back to the maker is impossible—which would likely be a factory in China. "The distributor and/or contractor will be responsible," he adds. " I have acted as a Chinese drywall expert witness in two lawsuits so far. Neither case has gone to court at this point but I do know they are trying to put all the lawsuits into a class action."

More CHINESE DRYWALL News
Venable gathers information on contaminated drywall for lawyers and says determining whether a home has Chinese drywall is quite simple. " A homeowner needs to send a 2" x 2" sample of drywall to a credible lab; if you go into your attic, the labels of the companies that manufactured and distributed the drywall are on the end pieces of the sheetrock (sheetrock is a broader term for drywall—it is all made from gypsum; sheetrock is the actual board and drywall insulates and finishes sheetrock) and you can often get a name. But you aren't going to contact the manufacturer; instead contact an inspector or your attorney."

Venable has a few more words of advice: "Most times dealing with all these inspectors and lawyers can prove problematic to the homeowner simply because this is new and most lawyers' expertise is defined to health issues or construction—in most cases they don't cover both issues. And that also goes for inspectors."