Brian says that he started taking Chantix four months ago and within one to two months started to feel more depressed. Approximately two months ago, he tried to commit suicide by taking sleeping pills, but managed to stop himself in time. He says that to some degree, he was not in control of his thoughts when he took Chantix.

"The whole threatening my wife with the divorce thing, that wasn't me at all," Brian says. "I thought I was depressed and only stopped taking Chantix because my prescription ran out. My wife started doing research on it and found out some bad stuff. I stopped taking Chantix two weeks ago and started to feel better after that week. It's been a gradual progression since then." 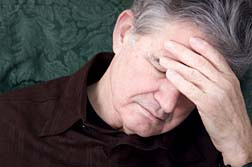 Although Brian's life was disrupted by Chantix, things are starting to get back to normal now that he is no longer taking the drug. However, for Chris S., his experiences with Chantix have resulted in legal problems that could last for a long time.

Chris started taking Chantix around the beginning of April last year. He says that the only side effects that were really explained to him were the nausea and strange dreams. Within a month of taking Chantix, Chris began to change. "I started worrying about everything, became really paranoid. I have a small company and I was running the guys ragged, trying to get two years' worth of stuff done in six months. A lot of people that knew me thought I was a worrier before, but it was more now. I would tell them that things had to be done, now."

Because Chris had trouble dealing with the nausea, he started taking Chantix sporadically. But he says that the drug was still affecting his mood. "I wasn't paying attention to my wife and kids," Chris says. "And I had a shorter tempter—I was yelling more often than I used to and I was quicker to snap at the kids. It drove my wife and I apart. I went to perform corporal punishment on my daughter and I gave her bruises. That led my wife to take the kids and leave. I'm still facing criminal charges because of that."

"I was always short-tempered, but on Chantix I was much more so. It was the same with my anxiety: I worried about everything all the time. A friend even said that he noticed during the summer that I was just not right, just off kilter. I'm not normally a violent person. I think that [Chantix] emphasized the problems that I have.

More News
"If I hadn't seen the commercial, I probably wouldn't have suspected that the Chantix could have caused that. I want it to be mandatory for doctors to spend more time talking to patients and if they notice anxiety or ADD, patients should take that medication under supervision or family should be warned about symptoms. I count myself lucky that I didn't have any experiences like the violence, but I would hate to see someone who has a severe violent anger tendency not be aware of the side effects. It almost destroyed my marriage and it has cost me $30,000 in legal fees.

"Doctors need to ask more questions and be careful who they prescribe this to. Ask the family members if they notice a difference in someone who is taking Chantix and if they do, then the patient needs to see a doctor right away. There is obviously a problem with this drug with some people. You don't realize that there's a change in your chemistry.

"I would love to quit smoking, but I'd never try Chantix again."