Just one day prior to the revelation that yet another smoking cessation patient has died at the hands of Pfizer's anti-smoking drug, the manufacturer unveiled the latest warning pertaining to the potential for suicidal thoughts.

Before last Friday, Chantix product information only hinted at dire behaviors in less-prominent sections of product literature. However, following a litany of complaints that have flooded into the office of the US Food and Drug Administration (FDA), together with an ongoing review of the drug's ultimate safety, Pfizer on January 18th updated the Chantix product labeling to reflect more serious concerns.

Depressed mood, agitation, suicidal thinking and suicidal behavior have been the reality for many users of Chantix, and its European counterpart Champix. As of now, the Chantix label specifically lists these concerns and asks doctors and health professionals to monitor for these behaviors.

Ironically, the day after the new, intensified product labeling for Chantix was announced, came word of yet another suicide attributed to Champix, which is marketed in the United Kingdom and is not regulated by the FDA. 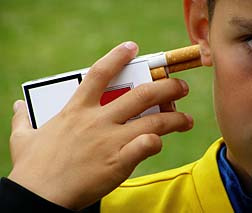 In this latest suicide, a 36-year-old husband and father of two from Yorkshire hanged himself back in November, shortly after completing a 13-week Champix program. His death comes a month after a 39-year-old man took his own life—again in the UK, and again as a result of using Champix.

European regulators have ordered improved warnings on the product, in view of its link to depression.

According to the Medicines and Healthcare products Regulatory Agency (MHRA), one individual had taken his own life while on the medication, while two others had attempted suicide and upwards of 60 adverse reactions consistent with suicidal thoughts had been reported.

Wayne Marshall was a welder and life-long smoker who had tried everything to stem his 20-smoke-a-day habit, according to his widow Emma. He had been excited about the drug's promise when prescribed to him in August, but according to his wife Wayne quickly went downhill. She indicates in published reports that he had cut himself off from family and friends, and had signed himself off work about a week before he died. However, she said, there were no outward signs that he was contemplating an end to his life.

Still, the changes to his personality were staggering. Always one to have a large circle of friends, to go out with the boys and cheer on the local football team, to find her husband sitting on the stoop sobbing uncontrollably was surreal. And even though he had taken up smoking again after finishing the 13-week Champix program, he appeared upbeat. He was talking with his young wife about Christmas with his two children from a previous marriage.

All seemed well, until November.

Chantix, and its British counterpart burst onto the market last year with much promise. It is the only smoking cessation drug of its kind that specifically targets those receptors in the brain that respond to nicotine. Chantix attaches itself to those receptors and prevents nicotine from reaching them, thereby preventing the receptors from releasing a round of pleasureful, but short-lived dopamine. The theory is that unlike cessation programs that serve to gradually withdraw from nicotine, Chantix eliminates the pleasure principal entirely.

However, the language on Pfizer's own Chantix web site does little to instill confidence, repeatedly deferring to the word 'believe' when describing how the program allegedly works.

More News
Chantix is just the latest in a serious of drugs that have been the center of concern over behavioral issues. Just this week it was revealed that the FDA has been undertaking an analysis of various anti-depressants over concern about dynamic changes in mood, emotion and behaviors—changes which can be present in divergent drug classes.

It has been learned that the FDA has forwarded communiqués to all drug manufacturers, with regard to a testing protocol for suicide and other dire adverse effects.

Chantix has had a banner year, in its first full year of availability. The drug is used by more than five million patients, with sales of $603 million through the third quarter of 2007.

It will be interesting to see how Chantix holds up under this latest scrutiny with regard to safety.