Patients who have a history of depression might be at risk for Chantix suicide when they attempt to quit smoking using the anti-smoking medication. However, not every patient says she has suffered such serious Chantix side effects. Barbara H. (not her real name) says she did not want to commit suicide while she was taking Chantix. What she did experience was an all-consuming depression that left her without a job and is still with her today. 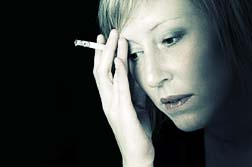 "Basically, I noticed that depression was setting in very strong," Barbara says. "I cut down on the dosage myself and then quit it [Chantix] altogether. I couldn't even get out of bed. I've had past experiences with depression, but nothing like this. I think it's still affecting me to this day and it's been about a year, now."

Barbara says that she first noticed the depression within 2 weeks of starting Chantix. However, she thought that because the holidays were approaching, it was a normal depression that would sort itself out. As time went on, the depression got worse, to the point where she felt she could not function. Barbara saw her nurse practitioner, who told her that the depression was not because of Chantix, but because of quitting smoking. Barbara did not believe her.

"I had quit smoking before without pills and I hadn't had the same depression," Barbara says. "This was like nothing I'd ever experienced. I can't say that I had suicidal thoughts, but I can say I was very depressed. I didn't think about taking my own life, but I had someone here who supported me and that helped me a lot. I don't know what would have happened if there wasn't support here.

"Hopeless is a good word for how I felt. I didn't get out of bed except to use the bathroom. I didn't care about self-care—I would go for long times without a shower. I just had no energy or gumption to get up and take a shower. I would lie in bed and hope I could sleep. I would just let the day and the world pass me by and hope for no interruptions—just hope for the day to pass.

Four weeks after starting Chantix, Barbara ignored medical advice and took herself off the anti-smoking medication. She says she is feeling better now, but believes she still suffers the effects from having taken Chantix.

More CHANTIX News
"I definitely did not feel that depressed before taking Chantix," Barbara says. "There is no way I would have made it through the full 12 weeks. I would say I'm semi-functioning now. I still have a hard time with depression and motivation. Things aren't as dark now as they were right after I quit, but it's still not over. I've had depression before and the doctors just adjust my meds and in 8 weeks, I'm fine. It's been over a year and I don't have normal feeling back. I feel like I'm in slow motion all the time. I have a hard time concentrating and my memory is a big issue. I basically graduated from college summa cum laude but now I can't remember conversation I had 2 days ago. It's really scary. I'm still not working and I've been off work for over a year with this depression.

"I recommend not taking it [Chantix], based on my own personal experience. It's a nasty, nasty pill."