Joe says he was doing OK, even in this lousy economic climate. He had a family and a steady job, but everything went sideways when he got a prescription for Chantix. 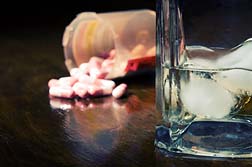 Joe first attempted suicide in June 2008, two months after his son died from SIDS. "I'd never been suicidal before," says Joe. "Even though my son died, and it was tragic, I believe the medication caused me to do this.

I took a few bottles of pills, drank a bottle of Vodka, and carved a pentagram in my arm so I could sell my soul to the devil and in return, bring my son back to his mother. That is how crazy I got on this medication. I left a suicide note and went to bed and next thing I remember waking up in the psych ward at Madison hospital 4 days later. My wife, Jennifer, told me that she called 911 and the paramedics had to intubate me. Three days after I was released, I went to counseling—still on Chantix and still smoking.

Things worked out for a while but Jennifer moved out with our three daughters. Of course she was also depressed from our son's death and she was also taking Chantix, but we got back together in September and moved into a new house. Things were good and we got married three months later (the kids are mine from a previous marriage)."

Sadly, the good time didn't last. Not one month later, Joe and Jennifer had a huge argument and Joe attempted suicide again—this time he slit his wrist right in front of his wife. Joe says he'd recently stopped taking Chantix, but he'd been on the med for 6 months and believes it was still in his system.

"That night I was arrested for domestic disorder and a judge ordered that I be put on a 72-hour hold," says Joe. "Then I went to court and got released. Again, things were fine for about a month. I was on a probation hold but it got revoked so I sat in jail for 9 months. I just got out September 25th. While I was in jail, my wife left me because of my suicide attempt. And another thing that happened in jail: I saw commercials on TV about Chantix side effects.

More CHANTIX News
'Ohmigod, that's me!' I said. It all made sense after I saw that Chantix ad. For almost a year I couldn't understand why I did such stupid things. I've always been there for my kids and my suicide attempts were such an embarrassment. And still are; I have to live with these scars for the rest of my life.

I don't blame the doctor who prescribed Chantix because he didn't know about the Chantix side effects. Now I have nothing but the clothes on my back. Today I'm staying at a friend's house; I lost my job, lost my home and I get to see my kids once a week but they won't let me have them overnight because of my instability.

I believe 100 percent that if I didn't take Chantix, this nightmare would never have happened and my world wouldn't have fallen apart."