" I wanted to Drive into a Tree on Chantix"

Saundra made a New Year's resolution: she was going to quit smoking. "I know from past experience that my medical insurance won't cover smoking cessation drugs but they covered Chantix," says Saundra. "This drug apparently had a high success rate, so I was hopeful."

And she had additional motivation. Saundra's kids had been after her to quit and she just found out that she would soon be a grandmother. "I had tried to quit many times," she says. "I'd tried the patch, Zyban, cold turkey, you name it. The first week on Chantix, I cut my smoking in half and was really pleased; I thought this might be the ticket. 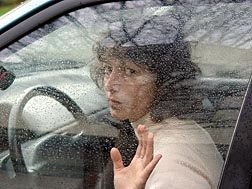 But by the end of the second week, I wasn't sleeping well, having horrific nightmares and was sinking back into depression—I have a life-long history of depression that goes back to my teen years. I had been stable for close to four years on medication, routine care and counseling--depression hadn't been an issue. But now I lost total interest in school (I was a part-time student with straight As); lost interest in my new job and didn't want to go to work: I didn't even want to get out of bed. I was ready to leave my husband and my kids, even with my daughter having a baby.

By the end of the third week, I was ready to drive my car into a tree. When I was prescribed Chantix there were no warning labels. During this week I was getting frantic so I saw a doctor at a walk-in clinic. 'I am really suffering from depression for the first time in many years and I am on Chantix, the only thing that has changed in my life,' I said. 'Could this drug have anything to do with my depression?' He said NO. And he said that Chantix has a high success rate and just asked how I was doing with quitting smoking. He totally avoided the depression question.

I didn't see my regular doctor who prescribed the Chantix because his office was about 20 miles away and because I was so ill, I didn't want to drive that far. And I was at the point where I didn't trust myself. I was thinking how I could kill myself and make it look like an accident so my family could collect my life insurance. I was absolutely deluded. I thought I was going to do them a favor; I figured they would be better off without me, not having to keep asking if I was OK.

During that time I was barely working and hardly going to school. I couldn't get a thought together in my mind much less put anything in writing. My family was trying to help—they were desperate to bring me out of this dark place.

By the fourth week I told my husband that I was going off Chantix. Around this time, I saw a commercial on TV that said if you have any history of depression, you shouldn't take Chantix. I cried. I sat down on the bed and sobbed. I knew it, I told them but they didn't listen to me.

That's when I picked up the phone and I called my psychiatrist. He told me to stop taking Chantix immediately. Then I saw my counselor and told her I was in crisis mode. Even as time went on, I didn't get better. I was so low I couldn't pick myself back up. Before, I learned to recognize the symptoms of depression and was able to seek help—to get intervention.

With the Chantix, I sunk into depression so fast I was unable to turn it around, I was alone and mad at myself, mad at the doctors and mainly mad at [Pfizer] the pharmaceutical company.

After two weeks of being in this horrible despair, I called my counselor again: it was like my antidepressant meds that had stabilized me all these years had quit working. Chantix rendered my medications completely ineffective. She suggested I check myself back in to the psychiatric hospital. I was there for 15 days and got out the first week of April.

More CHANTIX News
Now I'm doing much better and I'm back to work fulltime but I had to drop my classes--I couldn't deal with any extra stress. I'm on a different cocktail of meds and they still aren't exactly right. I lost a lot of time and a lot of money. And I lost a lot of confidence.

My main grief is that the drug company [Pfizer] didn't get the warning out there for people who are depressed. If I had known, I would never have taken it--I have too much to lose. I am married with three kids. Not only did I not know but I ignored what my own body was telling me: doctors said it was safe. I find it hard to believe that the drug maker didn't know these side effects. What are a few suicides to them when they can make huge profits?

My 11-year-old daughter still asks me, 'Mummy will we ever lose you?' I was fortunate to have a family and a job that supported me; others are not so lucky and they need help, something should be done. And I'm still smoking."