Chantix is a "Loaded Gun"

"I went to the doctor for a chest cold and I told him I wanted to quit smoking, obviously cigarettes were making me worse," says Diane (not her real name). "He said I could not get a prescription for Chantix because I suffer from bi-polar disease. He didn't have to tell me that because his father (also a doctor) put me on Chantix last year and I almost committed suicide".

Diane says she took Chantix twice, the first time for 2 months. It actually helped her to quit smoking but she got really irritable and stopped. "Then I tried taking it again in October 2008 and on December 12 my husband and I had a few drinks, we got into a huge argument and I wound up with an anxiety attack-- which is normal for my condition," says Diane. " I took my anxiety attack meds and that is the last thing I remember. Next thing I knew I woke up in ER at 3am with tubes in my arms. 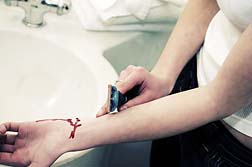 I had my Prozac prescription refilled that day and I was told that I took the entire bottle—90 pills. I have been diagnosed and treated for over 9 years with bi-polar disease and nothing has ever happened like this. I truly believe Chantix caused my suicide attempt.

When I woke up in ER they asked what kind of meds I was on—my husband, Dave, had already told them. Dave went home and did some research on the Internet and discovered that suicide was a side effect of Chantix. I'm just lucky I took something that didn't take my life, but I feel sorry for people out there that have some drugs in their medicine cabinet that could kill them…

I put my husband through hell. Dave was by my side the whole time and he was so scared. He didn't know what to do. He had thrown me in the shower after he found my crying uncontrollably in the bathroom, but then he saw the empty bottle of Prozac and called 911.

I was sent to the psych ward after I was released from ER. Fortunately when I talked with the psychiatrists they had heard of Chantix studies--that is the main reason they released me just after 3 days. Normally you have to stay for one week minimum.

I have never attempted anything like this or even thought about suicide. The psychiatrist called my doctor because they wanted to change my meds. He said the meds I am taking now work and this was not my norm—I am taking a good balance of drugs. So what else could have caused it?

More CHANTIX News
An attorney might think there is too much going on with me so I don't know if I have a case—but I am glad to get the word out; I don't think anyone should take Chantix and if you have a psychological problem like mine, this drug is a loaded gun. And it caused aggressive behavior: When Dave and I were fighting, I got angry and through a coaster at the wall, and even put a hole in it. I have never been aggressive in my life—I'm the most easy-going, laid back person. It is amazing that I behaved that way.

I'm on the nicotine patch now and so far, so good. The patch doesn't have any suicide side effects. I told my GP about this horrific incident and I am hopeful that he won't prescribe Chantix to any of his patients, 'especially people with emotional disorders', he said. Every day I thank my lucky stars that I am alive."