"Stay Away from Chantix"

Cindy B. had been smoking for 25 years when she decided it was time to quit. Unfortunately, she was given Chantix and suffered serious side effects. However, it was not until she read an article about Chantix that she realized her side effects were related to the smoking-cessation drug. 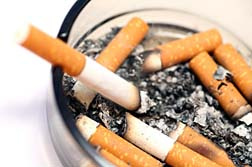 Although Cindy says she did not specifically have suicidal thoughts, she did feel hopeless, no longer caring if she lived or died.

A month ago, she stopped taking Chantix after reading articles about what other people went through while on the drug. She gave her unused Chantix to her boyfriend, who threw it away. Since stopping the drug, she says her side effects have lessened.

"I'm happy to be home," Cindy says. "I'm happy to be with my dogs. I'm getting another job. There's a very big change. I just can't believe that they kept giving me Chantix in treatment. I didn't clue in that the Chantix was related to my side effects. It's like everybody in the medical community thinks that Chantix is just fine. These drugs shouldn't be mood altering, but they are. I lost my faith in doctors.

"Be extremely careful on Chantix. It hasn't been around that long and it's like you're an experiment when the medical community gives it to you. I would say that people should actually try to do a smoking detox on their own. Stay away from Chantix."

More CHANTIX News
Cindy's comment that people are being used as experiments is actually quite accurate. An investigation by ABC News and The Washington Times has uncovered evidence that the VA is using soldiers diagnosed with Post Traumatic Stress Disorder to test Chantix. Despite knowing that Chantix is linked to suicidality and neurpsychiatric behavior, doctors did not warn study participants for three months about the risks. Participants were only warned after one veteran who was taking Chantix suffered a psychotic episode and had a violent incident with police.

Although news about the risks associated with Chantix was made public a few months ago, many people are just now discovering that their health problems, depression and suicidality may have been related to their use of the drug. In November 2007, the FDA issued a warning that patients taking Chantix may experience "suicidal thoughts, and aggressive and erratic behavior."

If you or someone you love has been harmed or suffered serious side effects while taking Chantix, you may be eligible to join a lawsuit against Pfizer, maker of Chantix. Contact a lawyer to discuss your legal options.

Posted by
Denise Williams
on September 18, 2015
I have developed alopecia areata from taking chantix.