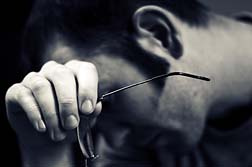 Kevin explains that for the first 10 days on the drug, he took a weak dose and then took one tablet a day that was twice as strong. Immediately after that first 'double dose" he had severe reactions, but he thought it was just withdrawal from nicotine, so he kept taking Chantix.

"One day I was driving to work and I was looking for camels across the road—I was hallucinating," says Kevin. "Then I remembered I was supposed to be looking for deer—they cross the road first thing in the morning in these parts. That was my first bad episode."

It got worse: Kevin became violent. "Granted I have a temper but I've never acted like this before--any little thing would set me off," he says. "For the next day or two I was fine but still agitated.

"One Friday I was supposed to come home from work and go for dinner with my wife, Michele. I got off work at 2.30 and it's a 30 minute drive home, but I showed up at 6.30. She asked where I had been and I had no idea, but I was driving because my car was almost on empty. Three hours of my life was gone and I had no recollection. I looked at my car to make sure I hadn't gotten into an accident --that was scary.

On Monday I called my doctor and saw him the next day. At this point I was not smoking or doing any drugs, other than Chantix and a nicotine inhaler. He said it might be the nicotine inhaler, maybe I was overdosing on nicotine. Then he put me on Wellbutrin, thinking I was depressed. Apparently a lot of people get depressed when they quit smoking but I wasn't depressed, I was pissed off because I wasn't enjoying my life. I thought quitting smoking would make me feel better; instead I felt physically and emotionally worse.

Around mid-August I started getting suicidal thoughts and I wanted to fight people. I wanted to hurt myself. One day I had the rope in the tree—I was going to hang myself. I put the rope around my neck and gave it a few pulls—just then my sister drove up and saw me...

Michele knew something was going on but I told her that I was getting better so she wouldn't ask me any questions. I didn't want to answer any questions or talk to anyone about my thoughts and that included my best friend and family. I quit communicating to everyone unless it was completely necessary.

My very last episode was September 9th. I was at a football game tail-gate party and the whole day was fine, I felt good and didn't drink too much, just a few beers. As soon as the game was over I told my wife we had to leave, right away. I gave her the car keys and we drove about 2 minutes until I made her pull over at a boat-launch site and became violently sick. Some boaters pulled up and asked if they could help. Michele said I picked up a big boulder and threw it at them and told them to leave me alone.

Michele pushed me back into the car and I passed out. It was only an hour's ride home but it took 3 hours because I kept waking up, demanding that she pull over because I had to fight someone. Halfway home I got sick in a restaurant parking lot. The owner came out and asked if I needed some water. I took a run at him. Michele told him that I was sick and on meds, and to please forgive me. Somehow they both got me back in the car. Michele said I cried and was incoherent for the rest of the way home.

We live in a very small community and the neighbors knew there was something wrong when they saw Michele trying to carry me into the house. Luckily one of our neighbors is a nurse so she helped. It was all they could do to get me up the stairs. I didn't remember a thing.

Michele was terrified. The next morning she insisted I stay home from work. She made me promise to stop Chantix and see the doctor. She told me what happened then Barb (the nurse) came over and corroborated her story.

More CHANTIX News
And here's another thing: Other than smoking I am very healthy but my heart rate went to 180 over 140—my doctor isn't sure if I had a mini-stroke or just be a reaction to Chantix.

I'm in my backyard right now and looking at that damn tree: I am going to get my chainsaw this weekend and Michele and I are going to cut it down together—and put this whole Chantix issue to bed once and for all.

For the poor people who did kill themselves or someone else, there was some closure—some of their families filed lawsuits and won settlements. But if you live through Chantix like I did, you don't even get acknowledgment or your money back from the drug company. It's ludicrous: If I brought a car that broke down I would take it back. With Chantix, I could have killed myself or someone else! "