Donna's experience with Chantix was like a fast descent into hell and she's lucky to be alive to tell her story. It started out with bizarre dreams and ended with a suicide attempt that put her in a psychiatric ward. Today she is dealing with embarrassment and remorse. And she's back to smoking a pack a day.

She took Chantix for three weeks in February of this year, but on her last pack, Donna was getting really agitated. She was still smoking about one or two a day, so it could have been a simple withdrawal from nicotine. But nicotine withdrawal could not explain what came next. 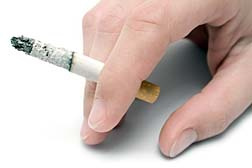 "I also had bizarre dreams, circus-like, where nothing made sense and they caused me to wake up a few times a night totally disoriented," she says. "I was awake but it seemed like I was still in the dream—reality was blurred, there was no boundary between reality and my dream state.

One morning that started out as a small argument with my husband turned into a rage. I became overwhelmed and felt intense anger toward everything—like one load too many. Everything exploded and I started breaking things. It was like I was a human piñata—years of hatred and anger came bursting out.

My poor husband left the house. I was accusing him of things that were ridiculous. I remember smashing a mirror and plates and figured I didn't want to live this way anymore. I remember picking up part of a plate that I had broken, slashing it across my left wrist a couple of times and I looked down at the first gash. It was pretty big—I saw the blood pouring out. Then I took a handful of Xanex and a bottle of champagne we had kept for a special occasion, popped the cap, put the pills in the champagne glass, drank it and staggered to the bedroom. That's all I remember.

My husband found me in the bedroom later in the evening and called the paramedics. Next thing I remember was waking up in a hospital bed, strapped down. I was in the psych ward! I said that the strap was too tight because it was digging in to the cut. Apprarently I was calling the nurse all kinds of filthy names, I was screaming all night—my husband was in the corridor and heard me screaming obscenities.

I just wanted to come home. I was so embarrassed, it was a nightmare. I couldn't believe what I did and worse, family members got involved.

Chantix is the weirdest thing. You get a euphoric feeling at first start then it takes over. I got really suspicious; I was obsessed that my husband was seeing someone (meanwhile he just had a back operation—it was physically impossible). If he didn't answer the phone, he was with someone; I just had to catch him doing something.

We have a smoke area at work and one day right before I started taking it, a co-worker told me that he would wake up in the middle of the night, raging at his wife. He said it started with Chantix. I thought this guy was a little strange and he was really shy. Maybe it didn't work for him and I didn't take him seriously. I remembered having the conversation with him the day I came home from the hospital.

The last time I took Chantix was March 3rd. I started raging around 11am that day and they by 6pm I was in hospital. They just assumed that we had a fight, I got drunk and took a bunch of pills. Nobody asked me if I was on any other drug

Then I had to go to a triage--I am still going. I met with five psychiatrists and they evaluated my case. They thought I had attempted suicide, but when I told them about Chantix they just nodded their heads, like they knew Chantix was the cause. Like they'd heard it all before.

I have never felt this way before, not even close. I feel guilty andso embarrassed, I don't know what the neighbors think of me. Thank god I have an understanding boss—I got my job back. It was like I was living in movie script with stuff coming out of my mouth that I couldn't control. A part of me that was hidden just emerged. It was some dark side and it scared me.

More News
What my co-worker said was so true. I haven't seen him since but it has taught me to listen to people on medication. And to go online and research a drug before you take it. It is also a crap shoot: it can work, but at what cost?

From what I have read, others have experienced severe depression. Afterwards, it does something to your brain, like it re-categorizes your thoughts. I had a rough few weeks at work, I still have nightmares and have trouble concentrating. The rage has been replaced by dread—from my embarrassment.

I'll try to quit smoking on my own when I am ready, without any medication. I just hope my story will make someone else take a second look. I know that Chantix has a big success rate but it shouldn't be on the market if it helps 99 people and kills one. I filled out the FDA report regarding prescription drugs and bad experiences and now I am glad I talked to you."