Chantix: "This Whole Thing Petrifies Me"

Tasha M. says she is still a little scatterbrained after her experience with Chantix. She says that she knows what she wants to say but she has problems expressing her thoughts. However, she is clear that she wants to get Chantix off the market.

"I tried everything to help me quit smoking," Tasha says. "I had been smoking for 20 years and I have a history of depression. Not a depressed life, but issues that have led me to be depressed at some point. So, when I went to my primary care doctor and told him I really wanted to quit, he told me about a new drug called Chantix that has a high success rate—some astronomical number—and there is no way of failing on this medication. 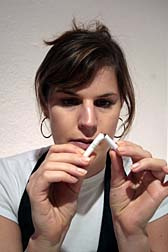 "In the beginning, I thought I was handling it well. But three weeks after taking this drug, my husband told me that I was irritable and was driving him crazy. He said he couldn't wait for me to quit taking Chantix.

"On Wednesday [February 13, 2008], I found out my endometriosis came back and I think it triggered a downward spiral. I was really scatterbrained and I cried at everything. Then on Friday I got an email, not an abnormal email, and I lost it. I felt disconnected. I phoned my cousin and she said I was saying words, not sentences. An example would be that I would say, 'dolphin, sun, picture, wall, incense.' In my head, everything made sense and I was trying to scream it out, but what came out was not what was in my head.

"My cousin called my mother-in-law, who called my husband, who came rushing home. I was sitting in the corner of the kitchen and I had no concept of what was going on around me. I could hear things—my children were screaming—but nothing made sense. I felt like I was in a coma and I wanted to scream for someone to understand me.

"We went to the ER, where the physician said he hadn't heard of problems with Chantix. I was stuck in a psychiatric room for five hours and they treated me like a drug seeker. I had a migraine from crying for so long. I was hypersensitive. I wouldn't just cry, I would bawl like I had lost a loved one. They Baker Acted me [where you are involuntarily committed because you are a risk of harm to yourself or someone else].

"My thoughts were 'is life worth it? I'm such a bad mom, such a bad wife. Is life worth the struggle?' Normally, I'm told that I'm wonderful with my children. In my head, I'm saying that this is because of the medication, don't let it beat you, but I have no control because I can't get the words out.

"I was brought to a mental facility. On Monday I wanted out but the doctor was worried about me. I couldn't tell what day of the week it was or even what month it was. I was completely disconnected from reality. I was discharged on February 20th and told to take it easy. But no one can tell me how long I'll be a basket case. I have a family to take care of. My father-in-law has my son still because I can handle one-on-one interactions and can handle two people, but I cannot handle constant talking. I cannot even handle the television right now because of how quickly it changes. I cannot comprehend the jumps in topic, the constant talking and the commercials.

"I stopped taking Chantix before I went to the hospital. I still want to cry all the time and I still feel lost and confused. My biggest fear was losing my mind and that's what I'm living right now. When you feel like you're losing your mind and your normal to begin with, but people treat you like you're losing your mind, that doesn't help. This whole thing petrifies me. You feel like a freak and don't want to tell people you were in a mental facility, but you want people to know so they don't go through it.

"I went to Wal-Mart recently [since the hospitalization] and I panicked. I went to the bra section and pretended like I was looking at bras and said to myself, 'you're not a victim, you're a fighter' until I had the courage to get up and run out of the store. I've disconnected with my friends. Even people I spoke to every day I stopped calling.

More News
"When I was in the hospital, they sent a psychiatric evaluator to see me. I told him I was taking Chantix and he put his hand on my wrist and said, 'I'm sorry, I have to Baker Act you.' He knew.

"I could not imagine if someone who had psychological issues went on this medication. I think it's important for the medical community to be aware of these issues and listen to what patients are saying. Don't let doctors just dismiss you. If some other woman is going through this, I want her to know she's not alone. I'm lucky to have a supportive family. If I didn't, I know I would be dead right now. There's no way I could have fought it. The feeling of losing your mind is probably the worst thing in the world. I felt I was losing my mind at 33 years old."

In the last five years, 544 suicides and 1,869 attempted suicides have been reported in connection with the anti-smoking drug Chantix, according to documents obtained from the FDA by the Al Jazeera show “America Tonight” under the Freedom of Information Act. According to Al Jazeera, Chantix is responsible for more adverse events than any other drug on the market, including suicidal behaviors, depression, psychosis, aggression, seizures, blackouts, temporary blindness, and blurry vision. The FAA, Defense Department, and the military have all banned the drug for critical personnel.

Posted by
Cathy Mills
on May 27, 2011
I was only on Chantix for almost three weeks before I quit taking it because I became extremely depressed, showed very aggressive behavior, crying outbreaks that I could not explain (not really crying, but sobbing to the point of feeling crazy and not knowing why), feeling useless and angry all the time. I have completely quit doing anything that I before found enjoyable. It took almost six weeks to even come near to feeling like myself. It's been almost a year sense I quit taking Chantix and I still feel that it changed me in some way. It altered the way I think and feel. I was never told about any of the side effects, my doctor raved about the success rate. I wish I'd never swallowed one pill.