Melinda and her husband both decided to quit smoking so the started taking Chantix in January of this year. Chantix reduced their smoking, but at what cost? "There were no warnings that we would go crazy, flip out and fight, and my husband thinking about suicide," says Melinda.

"First my mom was prescribed Chantix—she smoked forever yet quit around the same time we started it," says Melinda. "My husband Kenny and I cut back and we both stopped smoking in February. We thought this drug was amazing and the withdrawals weren't that bad. At the time we didn't think anything of a change in our behavior but we started fighting; just about niggly little things, stuff that didn't matter. 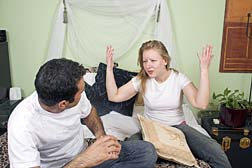 In the middle of the night we would start fighting. We have been married 12 years and never fought like this. We even asked each other why we were fighting but chalked it up to Kenny starting a new job and other stresses going on in our lives.

Kenny started go off on a tangent when he started the new job, making concrete bridge beams. But that wasn't enough--he became obsessed with changing the entire company. He wanted t-shirts and stickers made up to promote the company. From the time he got home at 3pm to 11pm every night, he would write out new ideas, filling countless notebooks with scribble. He got stranger and stranger. One night he decided to leave me so he could further his career. I managed to calm him down but a few days later, he flipped out at work and quit. He called me from his car and said he was going to kill himself.

Thank god he drove himself to the doctor's office because he felt so suicidal. They put him in the psychiatric hospital to stabilize him. On March 19th, they diagnosed him with bi-polar disorder. He was released from hospital five days later. Now, he is heavily medicated and unable to work. Kenny suffers from hallucinations: the mania makes him obsessed and he continues to be in this manic head space.

In retrospect, he should never have been prescribed Chantix because a few years back he had a manic episode; he saw a doctor and they just called it depression.

Chantix triggered this. I have been trying to figure it out: as soon as he stopped taking it, Kenny flipped out. I think there must be some kind of mood stabilizer in this drug, something that put his disorder back into play.

We have brought it up with every doctor—the doctors at the hospital and our family doctor. They make notes; nod and thank us for letting them know. 'Don't take it anymore,' is all they say.

More News
When all this happened, my mother came over to help me and she told me she had been crying for two weeks. 'People are making fun of me, they are talking behind my back', she told me. But nobody was doing that. She was getting paranoid, very sad and overly emotional. I feel that is happening to me too.

What if my husband didn't make it to the doctor that day? I'm trying right now to apply for social security benefits—the doctors have told us he could return in a year or maybe eight years, depending on whether they can find the right cocktail of meds.

Sure, we quit smoking but at what price? And it was temporary, we are both smoking again. I thought it was a miracle drug but I don't know what it has done to us. I want the manufacturers to pull Chantix—it doesn't belong on the market and it is hurting a lot of people. The label warnings were updated but they didn't tell me I was going to be psychotic! Weird dreams yes, but not that we would flip out and go crazy, fighting and thinking about suicide."