New marketing ads for Pfizer's Chantix will look very different from the original 'tortoise and the hare' ads of last year, now that Pfizer has to include risk for suicide.

Pfizer was forced to withdraw its ads for the much-maligned smoking cessation drug in February, after the US Food and Drug Administration (FDA) issued a public health warning pertaining to the potential risk for suicide, and a strong warning letter issued by the FDA to Pfizer, validating the potential causal link between the use of Chantix and suicidal thoughts. 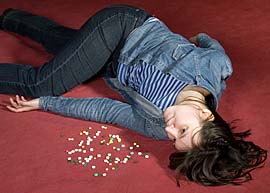 The new ads are expected to be fronted by a fair amount of what is described as 'precautionary language,' and we should be seeing them soon.

The reason we'll be seeing them soon is that, incredibly, Chantix remains one of Pfizer's top-sellers. This, in spite of all the new reports of Chantix users becoming depressed and suicidal—together with a number of actual suicides. The response to the latter appears to be a more determined attempt on the part of doctors to consult carefully with patients before prescribing Chantix, and carefully monitoring them while they are on the drug for warning signs that could lead to dire consequences.

There is little doubt that Chantix carries substantial risk factors. And yet, sales are going through the roof. Such is the desperation for Americans to quit smoking.

One theory surrounding the propensity for suicide ideation amongst Chantix users is the possibility that Chantix might just work a bit TOO well. Chantix works by blocking the so-called pleasure pathways in the brain that ultimately result in the nicotine rush that comes with each puff. However, some are suggesting that Chantix, which targets the brain, suppresses other types of pleasures and happiness, leading to depression.

Add to that the challenge of quitting tobacco in the first place, and the results in some people can be devastating. The very act of attempting to quit what for many has been a life-long habit can, in itself be a risk factor for depression.

It's been noted previously that during clinical trials for Chantix, participants were hand-picked—an observation backed up by Dr. Nancy Rigotti, director of the Tobacco Research and Treatment Unit at Massachusetts General Hospital in Boston. She was involved in Chantix studies conducted there, and says "those trials mostly enrolled people who were pretty healthy. They did not include people with depression or much of a history of depression."

An interesting sidenote is that in spite of having a handpicked group of quitters, and supporting their time on Chantix with weekly counseling sessions, the majority of Chantix testers were not successful in staying away from smoking once the prescribed 12-week Chantix regimen was over. However, even with a relatively low success rate, the results from Chantix (varenicline) were better than that of Zyban, its closest rival. That, it seems, was good enough for the FDA to give it the nod.

Still, according to Dr. Rigotti, it's possible that varenicline "might have more psychiatric side effects in certain groups of people."

It has been written that the brain of an addicted smoker treats nicotine as if it is essential for survival. Little wonder that not only is the effort of quitting so difficult, the loss of the smoker's pleasure principle appears to be made all the more devastating in some people with the inclusion of Chantix, which has been known to invoke such deep depression and malaise that suicide is a concern.

Margaret Bastian of Rochester, New York is one of many Chantix users reporting problems. "I started to get severely depressed and just going down into that hole...the one you can't crawl out of." When Bastian swallowed too many sleeping pills and other medications one punishing night, her doctor immediately took her off Chantix.

More News
And yet, in spite of all the concern, Chantix continues to do well—and it doesn't hurt when public health services start recommending Chantix to its clients, as was reported recently by CNN. Sales of Chantix were up an incredible 71 per cent in the first quarter of this year, topping out at $277 million.

That's often the case with publicity, regardless of whether it's negative or positive. As the old saying goes, there is no such thing as bad publicity: a spate of reports on the perils and risks of Chantix appears to have effectively raised the profile of Chantix in the public conscience, resulting is a sharp upwards spike in prescriptions.

Such is the desperation of Americans, who will try anything to quit the habit that could kill them.

Even if the cure could kill them too...