A young girl suffering from severe cerebral palsy was awarded in excess of Can. $1.5 million by a Supreme Court judge in British Columbia after her mother sued the health authority overseeing the hospital where she was born. A doctor and two nurses were also named in the cerebral palsy medical malpractice lawsuit , although one nurse was exonerated. 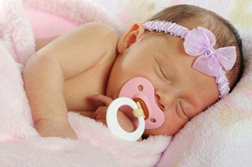 According to a Canwest news article published in the 6/19/10 edition of the Star Phoenix of Saskatoon, May Jean Steinebach gave birth to Mirella Rochelle Steinebach on March 31, 2005. The little girl's severe cerebral palsy is attributed to a placental abruption, which occurs when the placenta separates from the uterine wall.

The abruption occurred some time prior to childbirth and interrupted the supply of oxygen to Mirella's brain, starving the little girl of oxygen in the womb for a period of time before she was born.

Steinebach alleged that her family physician and the two nurses who worked at the Surrey Memorial Hospital were negligent in their perinatal care of Steinebach and her unborn child. She argued they failed to "properly consider" signs indicating the onset of the abruption, the need to consult an obstetrician when she was admitted to hospital, the need to intensely monitor the fetus' health during labor, and "the need to be prepared for immediate intervention that would have resulted in Mirella's delivery before harm resulted from a complete abruption."

Named as defendants in the lawsuit were Dr. Jodi Lock O'Brien, who attended Steinebach during labor and delivery, as well as nurses Charito Hermogenes and Rosemary Appleby. Steinebach also sued the Fraser Health Authority, which oversees the hospital.

In his decision, BC Supreme Court Justice Ian Pitfield found that nurse Appleby had no part in the injury claim concerning Mirella and found her not to be at fault.

However, the same could not be true for the others. "I find that the negligence of both Dr. O'Brien and nurse Hermogenes caused Mirella's injury," Justice Pitfield wrote in his ruling. "The evidence indicates, and I find, that Mirella's physical injury at birth was catastrophic.

More CEREBRAL PALSY BIRTH INJURY News
"She cannot speak and is not likely to speak. She cannot swallow and must be fed and will always be fed by a gastronomy tube. Her respiratory capacity is severely impaired. It is likely that she will suffer a range of respiratory illnesses through her lifetime.

"Her motor ability is severely restricted. She will never be able to walk. She may be able to turn herself over but she cannot yet do so at age five. There is no way of knowing what appreciation, if any, Mirella has or will have of her circumstances. It is not likely that she will develop intelligence beyond that of a four-year-old. There is no way of knowing whether she is in pain or whether she will experience pain in the course of her lifetime."

Justice Pitfield assigned 60 percent of the liability to the doctor and the remaining 40 percent to nurse Hermogenes and her employer, the Fraser Health Authority.
READ ABOUT CEREBRAL PALSY BIRTH INJURY LAWSUITS

If you have suffered losses in this case, please send your complaint to a lawyer who will review your possible [Cerebral Palsy Birth Injury Lawsuit] at no cost or obligation.
Request Legal Help Now