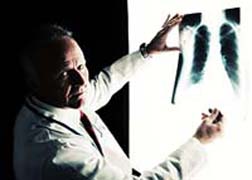 Forest, along with Almirall SA, said that aclidinium had been more effective than placebo in treating the symptoms of chronic obtrusive pulmonary disease. According to the Mayo Clinic, these symptoms include shortness of breath, wheezing and tightness in one's chest.

The effectiveness of the new drug was reportedly tested through a measurement of how much air patients could exhale. US patients were examined after 12 weeks while patients in Europe were checked after 24 weeks, the news source said.

In all, 828 patients took part in the trial and were either treated with 200 or 400 milligrams of the drug or the simple placebo. The two drug companies said that aclidinium was also better at improving the patients' health statuses and reducing breathlessness than the placebo pill.

The companies are reportedly planning to file for approval to market the drug in Europe and the US in mid-2011.