Last year, Angie decided to save money by consolidating balances from a few credit card accounts and transferring them to The Bank of America—where she had a platinum VISA card. "They told me I would be charged 9.9 percent for a transfer balance but my statement showed over 40 percent," says Angie. Yet another blatant abuse of credit card rate hikes.

"Before I transferred my other accounts to my Bank of America credit card account, I even phoned to confirm the rate of 9.9 percent and the amount of credit available," says Angie (not her real name pending a possible lawsuit). "I asked them that if I went ahead and used that credit, this low rate was going to be applied for the entire transaction—they confirmed that it would be fine and that rate would apply." 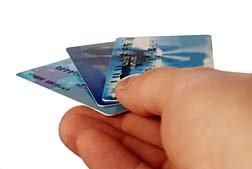 So Angie consolidated balances from the rest of her credit card accounts and transferred onto one—with the Bank of America. But her first month's statement showed over 40 percent interest! She thought there must have been a mistake and phoned customer service right away. "They explained that amount was because of a transfer fee for that month. The next month would balance itself out and decrease to the 9.9 percent special rate," she says. That didn't sound too convincing to Angie, but she gave it another month and checked her statement again.

This time, the interest rate had decreased but only to 20-something percent. "I phoned the bank again and they said it was because I had transferred above 80 percent of my available credit," says Angie. "That is why I had a high interest increase, even though I still had credit available on that account. If my whole point was to consolidate debt, what was the point?

I told them I had confirmed the lower rate on the phone with one of their reps before transferring. They just told me that other credit companies were worse. By comparing themselves to other companies, they tried to wrangle their way out of this illegal rate hike.

'What other companies are doing this?' I asked them.

'Well, we can't supply you with that information,' they replied. They were being cagey about this whole thing.

I even gave them an example: I had an account with another creditor that kept their end of the deal with a lower interest rate. They didn't care. They said in the next month or so, that deal will change and all credit card companies are changing.

My dealings with the Bank of America all transpired within the past year—just recently
I took all my money out of the Bank of America account and transferred it to another creditor -under 10 percent. I didn't even talk to the people at Bank of America, even though I had been with them for years and always had great service—I am appalled.

I would like to see the transfer balance fees refunded to me and the interest on it, at the very least."

More News
Angie may not have long to wait. On February 7, 2008 Consumer Action announced that new legislation was introduced by House Financial Institutions and Consumer Credit Subcommittee Chairwoman Rep. Carolyn Maloney (D-NY) and Financial Services Committee Chairman Barney Frank (D-MA) to curb some of the most abusive credit card lending practices. Key points of the "Credit Card Bill of Rights Act" are prohibitions on the following:

If you have been victim to any of the above, you may want to seek legal help.