Credit Card Abuse: To Be Continued?

On March 13, 2008 five credit card consumers were ready to testify at a House Financial Services subcommittee hearing regarding credit card industry practices and credit card abuse. But it turned out to be a waste of time: GOP staff members asked them to sign waivers allowing public disclosure of their private financial matters—which they refused to sign. One witness said that the waiver "seemed very intrusive." Sounds like it was written by the credit card industry. 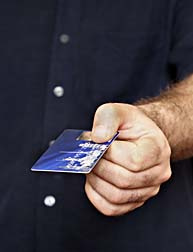 "I've never seen anything like this in my life," said a frustrated Carolyn B. Maloney, D-N.Y., chairwoman of the Subcommittee on Financial Institutions and Consumer Credit. Republican Spencer Bachus (Alabama) on the Financial Services Committee, said the witnesses were asked to sign in the interest of a balanced hearing that would allow the companies an opportunity to respond. Maloney had to postpone the hearing until representatives from the credit card industry would have the opportunity to testify—but would the credit card consumers return?

Travis Plunkett, legislative director for the Consumer Federation of America, had doubts. The waiver "looked like a last-ditch effort that the minority staff used to intimidate very effective witnesses," he said.

The Congressional hearings were brought about last year by Senator Carl Levin, D-MI. The Senator proposed to limit "penalty" interest rates to an additional seven percent above the previous rate; prohibit retroactive penalties and double cycle billing; and limit the amount of fees companies could charge customers who exceed their credit limit.
At that hearing, one credit card consumer testified that he exceeded his charge card's $3,000 limit by $200, which resulted in $7,500 in penalties and interest. After paying an average of $1,000 a year for six years, he still owed $4,400!

On April 16, 2008 the hearings on H.R. 5244, the Credit Cardholders Bill of Rights, resumed. "There is… a widespread perception that credit card consumers are sometimes treated unfairly in their relations with credit card companies," said Spencer Bachus Ranking Member, Subcommittee on Financial Institutions and Consumer Credit.

Credit card consumers showed up and discussed their problems and the credit card companies replied with actions they took regarding those specific customers. In response to the hearings, the Federal Reserve has finally issued regulations governing industry practices and consumer protection.

In May, it issued a proposal (that should go into effect by the end of this year) that would limit interest rate hikes, abolish certain fees, and modify controversial billing practices—regulations that will curtail credit card abuse.

Understandably, the credit card companies aren't too pleased, believing that these regulations will cut into their profits. "While the proposal might address certain issues, it might unintentionally create bigger problems for consumers," said Kenneth Clayton, general counsel at the American Bankers Association.

Meanwhile, countless Americans sink deeper into debt due to the credit card industry's deceptive and unfair practices—which they will continue--at least until the end of the year.

More News
"I have an "unlimited" Citi Card however when I was unable to pay the balance in full they said my account was in default so my interest rate went from 17 percent to 35 percent," one consumer reports to LawyersandSettlements.com. "When I asked for a payment plan they offered me a six-month payment plan of $3,500 per month for a $10K balance. When I told them that was unreasonable, they said if I paid $2,900 they could lower my monthly payments. They have now offered me a month payment plan of $800 per month, but state that they will not lower my interest rate from 35 percent even if I pay."

Another consumer reported that her credit card company "is trying to collect a huge balance which was created by their charging an annual fee which put me over my credit limit. I have already paid them around three times what I was actually charged on my card…they are ruining my credit and have turned my account over to a collection agency. I paid the least minimum payments but refuse to pay more as this is obviously very unfair and dishonest."

How many more people will slide into debt before Congress bans deceptive credit card practices across the board?