Despite the excellent payment histories of credit card customers, credit card companies are still raising their rates and customers are very angry. Credit card rates have been increasing by as much as 50% for some customers. In January, Bank of America customers received notification that their interest rates would be raising from 13% to 24.99% and these customers are confused as to what they could've done to incur such high rates. The truth is that many did nothing to incur these rates, but that credit card companies are raising rates all over the country. 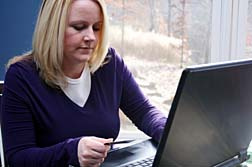 Companies such as Bank of America that issues credit cards allow themselves the ability through their terms and agreement with their customers to change interest rates when they deem appropriate. They do this when profits begin disappearing, which is the perfect recipe for a disappointing quarter. By increasing rates, the credit card customers are the ones that make up for the lost earnings.

Bank of America states that the increase is based on external credit criteria, which means the decision was based upon payment defaults outside of Bank of America. This is where the consumer advocates have become very upset.

Bank of America sent their customers' letters that told customers that if they did not use the card anymore, but decided to make payments on the balance, they could keep their current interest rate. However, the customer was instructed that in order to take part in this action, they must submit in writing that they will not use the card, but only pay the balance.

Bank of America's rival, Wachovia, bases rate increases on how well the customer has made their payments on their Wachovia card and not on external financial activities. Wachovia does this because many customers maintain different types of accounts with Wachovia and they want to keep those good customer relationships.

More News
It is believed that the reason behind the credit card rate increases despite rate cuts by the fed is due to the rise in the foreclosure rate. This makes banks very reluctant to lowering their interest rates for those who have had declines in their credit scores or have missed payments. However, just like the Bank of America situation in which 1 million cardholders have paid on time and experienced rate increases, cardholders from other banks have also not benefited from the rate cuts by the Fed. This is because banks are raising rates to compensate for losses in the mortgage department.

The good news is that Congress has been looking into this credit card rate hike situation because some companies are lowering credit limits, which hurts credit scores by increasing the amount of available credit used. As for rate cuts, the credit card customer will not experience much relief since the variable rates of credit cards saw a decrease of only less than a point.

If you have been a victim of any unfair practices by your credit card company, including substantial rate increases, unfair penalties or broken promises, and would like to take a stand by participating in an action against them, please contact a lawyer involved in a possible [Credit Card Abuse Lawsuit] to review your case at no cost or obligation.
Request Legal Help Now